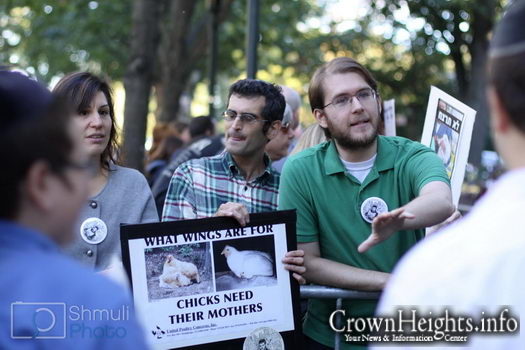 An “animal-rights” group that lost a Federal lawsuit against Chabad of Irivine, California, over the pre-Yom Kippur ritual of Kapporos in a landmark ruling earlier this year, is at it once again — this time suing the Irvine Police Department for not enforcing animal cruelty laws by allowing the practice to continue.

It is the second attempt in recent years by the San Diego-based Animal Protection and Rescue League to halt the ceremony.

The lawsuit filed in the U.S. District Court in Santa Ana name both the Irvine police and the Los Angeles Police Department, saying that they protect the “illegal killing of animals” by not cracking down on the kapparot ceremonies, the Orange County Register reported.

A lawsuit filed by the group against Chabad in 2015 on the basis of animal cruelty said that the chickens are crammed tightly into cages and mishandled, and are disposed of and not used for food.

A federal judge in May dismissed a lawsuit filed on behalf of the Virginia-based United Poultry Concerns claiming that the practice violates the state’s unfair competition law.