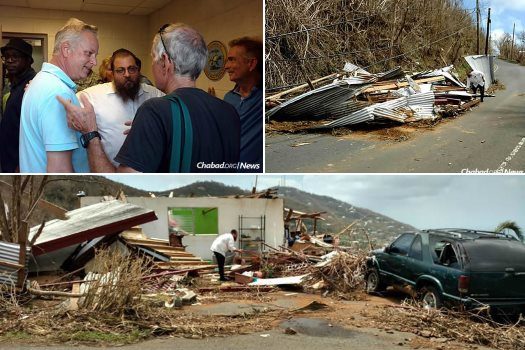 Rabbi Asher Federman, director of Chabad-Lubavitch of the Virgin Islands, has remained on St. Thomas, which was devastated by Hurricane Irma, to give what material and spiritual comfort he can to the island’s small Jewish community.

Before Hurricane Irma, many of the Jewish community’s events on the island of St. Thomas were held outdoors under a large wooden trellis built in the front yard of Chabad of the Virgin Islands. That’s gone now. Irma tore the roof off of a resort a half-mile away and deposited it onto the trellis, crushing it like matchsticks.

Irma has left St. Thomas and St. John sheer disaster areas (the U.S. territory’s third island, St. Croix, was relatively unscathed), destroying homes and businesses and anything else in its way, including the roof of the Ritz-Carlton resort. Four people have been confirmed dead. Power lines are down, there’s no running water, fuel is rapidly disappearing, and cell-phone reception remains limited, where it is available at all. Officials estimate that electricity won’t be restored for four to six months.

“The damage is unprecedented,” states Rabbi Asher Federman, co-director with his wife, Henya, of Chabad-Lubavitch of the Virgin Islands.

On Thursday, the day after Irma hit, Federman and his wife took a printout of their local contact list and began reaching out to people one by one via phone, social media or word of mouth. They hit the road to check up in person on those who did not respond. Getting to people that first day entailed removing trees and rubble from their path, and in some cases, parking the car and hiking to homes.

Friends, neighbors and community members they met reacted emotionally to the unexpected knock on the door.

“Everyone is happy to be alive,” observes the rabbi. “It’s times like these that put into perspective what’s really important in life.”

The Federmans have been fielding ongoing calls from concerned relatives seeking information, and as they went around the island, they took down the phone numbers of parents and relatives on the mainland or abroad to pass on messages to them that their loved ones were safe. As of Monday, they have accounted for all of their contacts on St. Thomas.

After spending Shabbat in the Paragon Medical Building, a secure compound where the Federman family and others had holed up for the storm, the rabbi’s wife and nine children joined other Virgin Islanders being evacuated by boat to Puerto Rico, while Federman and Rabbi Mendel Galperin have stayed behind to continue the work locally (Galperin’s wife, Chyena, and their baby also went on the boat).

There’s no shortage of problems ahead. Most people have access to fresh water not from the city but from cisterns on their property, powered by electric pumps. While those with generators are able to get by for now—not everybody has one, and many generators, like Chabad’s, have been damaged or destroyed—the situation is degrading quickly. No running water means no showers or flushing toilets, and people must now manually lower buckets into their cisterns to obtain water. Food is disappearing; whatever has been held in unpowered refrigerators will soon be unsalvageable.

Safety is also a concern, and, in part to curb some of the looting that has taken place, an island-wide curfew that has been imposed officially allows people out between the hours of noon and 6 p.m. U.S. Marines have deployed, as has the National Guard, yet the situation remains desperate.

The two rabbis now spend the day making visits around the island, finding out who needs what, if they’re low on any essentials, and how they are doing physically and emotionally, and, of course, spiritually. The men come carrying tefillin and new mezuzahs, and no one, they report, has refused the chance to do an extra mitzvah.

‘Through Thick and Thin’

The Federmans moved to Charlotte Amalie, the territory’s capital, in 2005, when they established Chabad on the island. Hurricane watches and warnings are a regular part of life in the Caribbean, but the couple hadn’t experienced anything like this before. It was only days before Irma hit that anyone realized that this one would be barreling straight towards them, and that it would prove to be the worst in decades. That’s when the mad dash to leave began, with any available commercial flights out booking up quickly and spots on charter flights hovering in the $6,000 range.

“Obviously, not everyone can afford to pay such prices,” acknowledges Federman. “As emissaries of the Rebbe [Rabbi Menachem M. Schneerson, of righteous memory], for us, the Jewish community here is not secondary; they’re our family, so our place is with them. We’re not here only when the sun is shining; we’re here through thick and thin.”

The Federmans and the Galperins spent the duration of the storm in the Paragon building, where they moved with help from friends in the medical community, and they have been using the building, which suffered only cosmetic damage from Irma, as a Chabad command center.

The U.S. military has been coordinating the evacuation of the stricken island since relief got there at the end of last week, beginning with the elderly, pregnant and small children. Aside from the U.S. military ships, cruise liners are being used to remove tourists, and a flotilla of private boats are taking people out as well, which is how Henya Federman and her children, and Chyena Galperin and her baby, left. For now, they will remain in Puerto Rico, where most community members are being taken, to assist however they can from that vantage point. The rabbi and his assistant, however, have no plans to leave.

“We’ve taken proper measures for our safety and security, and for that of our community, but at the same time, I cannot leave,” says the rabbi.

Preparing for the High Holidays

Meanwhile, in nearby St. Martin, which was hit a bit earlier but just as hard as the Virgin Islands, Chabad emissary Rabbi Moishe Chanowitz’s wife, Sara, and their five young children were evacuated to Puerto Rico on a U.S. aid airplane just prior to Shabbat and have since flown to New York. Like Federman, Chanowitz has remained on his home turf of St. Martin, assisting with evacuations on both the Dutch and French sides of the island, and spending Shabbat with Jewish students at the American University of the Caribbean Medical School.

While many are still trying to leave the Virgin Islands, some will not. Whether they are medical, or other essential personnel, or people who must protect their homes and properties, they plan to remain on the island, and Jewish community members are included in their numbers.

As such, Federman says he’ll be holding services for Rosh Hashanah and Yom Kippur. As he and Galperin make their rounds each day, the rabbi blows his shofar for the Jews he meets, as is customary during the month of Elul, which precedes the High Holidays. Rosh Hashanah is the anniversary of creation, and each year the shofar is blown to once againcoronate G‑d Almighty as King of the universe. In return, G‑d renews His creative energy that sustains the world.

“Right now,” says Federman, “there’s no place in the world that needs to hear the blast of the shofar more than the Virgin Islands.”

To assist in the effort, donate to Chabad of the Virgin Islands. 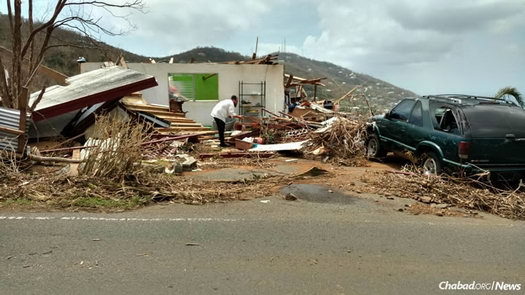 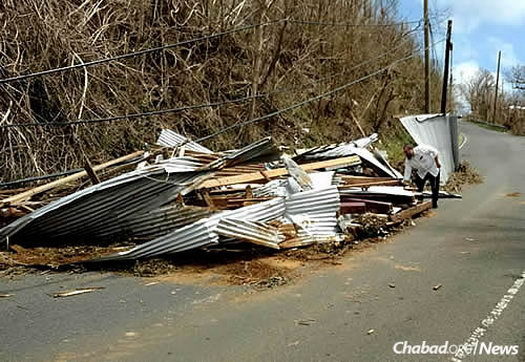 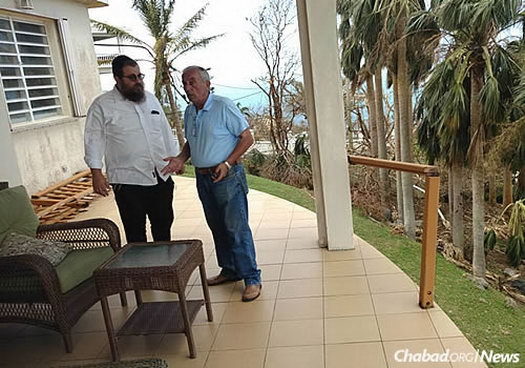 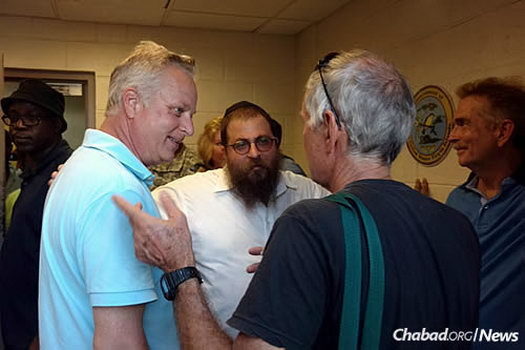