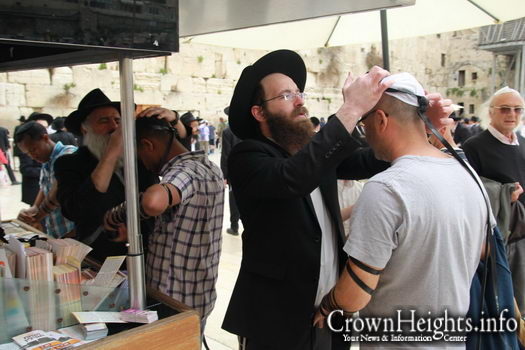 A Lubavitcher Chosid was standing on Herzliya’s Sokolov street offering strangers the opportunity to don Tefillin, when a municipal supervisor approached him and demanded that he immediately take down the stand and cease his activities.

For many years, Chabad men have set up stands all over Israel, as well as in many other countries, offering to help Jewish men put on tefillin (the performance of a daily Torah commandment to put words with commandments, placed in small black leather boxes as told to Moses, on one’s arm and forehead – symbolizing the heart and the mind turning to G-d) Chabad does not force anyone to put on tefillin, but rather offers those who may be interested.

“This man was asked several times to take down his table, but refused,” the supervisor wrote, adding that Amitai “is harassing passersby by asking them to put on tefillin.”

Amitai received a fine of 730 shekels, and the police were called to the scene.

MK Bezalel Smotrich (Jewish Home) responded to the incident by saying that it is “unacceptable for such things to happen in a Jewish country.”