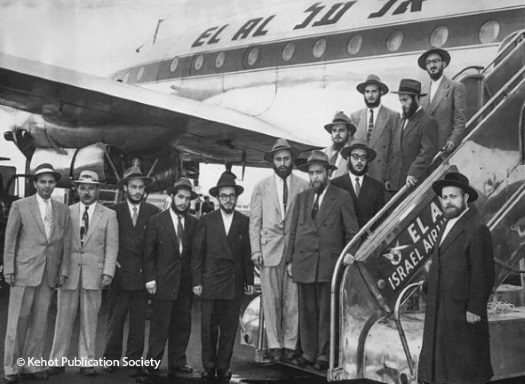 After the attack, emissaries travel to Kfar Chabad in the summer of 1956. Rabbi Krinsky stands third from left.

Rabbi Yehuda Krinsky, a personal secretary of the Lubavitcher Rebbe, recalls the eventful summer of 1956, following a tragic terror attack on the recently-founded village of Kfar Chabad that claimed the lives of five young students and their teacher.

From Lubavitch.com by Rabbi Yehuda Krinsky

In the spring of 1956, just five years after the Rebbe accepted the leadership of Chabad-Lubavitch, tragedy struck Kfar Chabad, the Chabad village near Tel Aviv.

A group of Fedayeen terrorists from Egypt infiltrated the village’s vocational training school and murdered five young students and their teacher as they stood in prayer in their classroom.

Kfar Chabad, established in 1948, was then a fledgling village struggling to build its infrastructure. Its residents, predominantly refugees who survived Stalin and Hitler, were hoping to establish their lives anew. The massacre traumatized them, shaking their confidence in the village’s future. They were considering moving elsewhere.

But the Rebbe believed they would find their greatest consolation by remaining and working to realize the vision they had nursed for so long: a thriving community with good schools, where they could give their children a joyful and authentic Jewish education, comfortable homes, and economic opportunities that would allow them to prosper—all the privileges that were denied them in communist Russia. “B’zos tenuchomu”—the Rebbe told them. “In continuing to build, you will find your consolation.”

In his desire to participate in these efforts and console the grieving community, the Rebbe sent 12 senior students from Chabad-Lubavitch Headquarters in New York to spend a month living with the people in Kfar Chabad. The students would reach out to the residents, get to know them and give them the courage and the moral support they needed to remain and continue building the village. I was privileged to be one of those students.

Our six-week excursion included a tour of five countries during the first two weeks en-route to Israel. As we traveled to England, Belgium, France, Switzerland and Italy, we followed an itinerary prepared by the Rebbe’s secretariat that kept us occupied at least 15 hours each day. We met with Jewish communities and their religious leaders, we spoke at press conference, we presented talks and scholarly lectures to yeshiva students, high school students, government leaders, a gamut of Jewish organizations. Despite our youth—we were all in our early twenties—we were everywhere royally received as special emissaries of the Rebbe.

Sixty one years ago this summer, Friday morning, July 13,1956, concluding the two weeks in Europe, we flew from Rome to the Holy Land. Thousands of people greeted us at the airport. Kfar Chabad was still reeling from the tragedy, and our first Shabbat there was an emotional experience, observed in a spirit of encompassing camaraderie, with spirited prayers and soulful singing.

This was one of the first missions appointed by the Rebbe, and it bore his trademark concern for the welfare of Jewish people wherever they were. Although the idea of sending rabbinical students on a transatlantic flight was a novelty back then, the Rebbe spared no effort when it came to reaching out to his brethren in distress and embracing them with support—moral, spiritual, material.

Before leaving New York, I was commissioned to keep a daily diary of our tour. As I review my diary today, I am reminded that in 1956, an aura of mystery and great curiosity, even on the part of Chabad Chasidim, about their new leader, surrounded the Rebbe. Hence the interest, the enthusiasm and the thirst for first-hand accounts of life in the courtyard of the Rebbe that we encountered wherever we went

We did our best to share our experience of the Rebbe; we relayed his teachings, we described his farbrengens and we tried to convey the elevated reality of day-to-day life in his presence. Of course, we kept our focus on the Rebbe’s objective, to help ameliorate the painful situation of the families in Kfar Chabad and to strengthen Jewish life in the Holy Land of Israel.

Our tour, as we would learn in the ensuing years, had the desired result and it was far greater than we thought. The bereaved families were deeply moved by the Rebbe’s caring; the residents remained, building Kfar Chabad together, which has in the years since blossomed into a self-sustaining community, growing many times over.

As I reflect on this period, I consider our good fortune to have lived in such close proximity to the Rebbe, to see him daily and eventually serve as his emissaries. I understand the desire of young people today to hear about life in the Rebbe’s presence, and their yearning for a glimpse of those early days in their full splendor.

But I also recognize that the Rebbe’s inspiration and influence are clearly as strong today as ever. How else to explain the steady stream of young men and women who now cross the Atlantic, the Pacific and every other ocean, with resolve and love and a one-way ticket to answer the Rebbe’s calling?