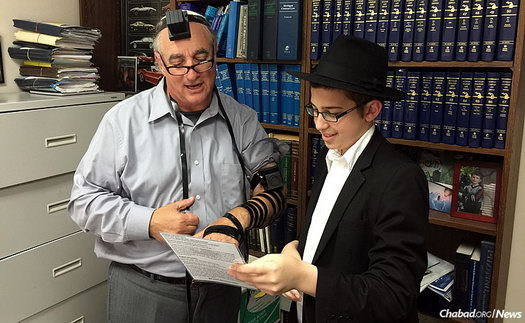 Schneur Deren boards the city bus every Friday afternoon to visit offices, homes and stores in the Detroit suburbs of Oak Park and Southfield, Mich. The 16-year-old has had the same route for three years now, ever since he started attending the Lubavitch Yeshivah-Zekelman Campus in Oak Park.

About 70 students, ages 13 to 16, travel in pairs, helping people perform mitzvahs. Deren spends several hours offering to wrap tefillin with Jewish men and boys over 13. He also carries a ready stock of Shabbat candles to give to women and girls, and is prepared to talk about Jewish holidays or current topics of interest with the people he encountered along the way.

“You become real friends with them,” he says. “Every route becomes your community. It’s good training for when we open our own Chabad Houses around the world one day.”

This spring, in honor of the 50th year since the launch of the Tefillin Campaign by the Lubavitcher Rebbe—Rabbi Menachem M. Schneerson, of righteous memory—the students set an extra goal: to put tefillin on 1,000 men between their return from Passover vacation in April and Gimmel Tammuz on June 27, the anniversary of the Rebbe’s passing.

The teens filled in boxes on a large chart in the school’s lobby to track their progress. “Every day, everyone looked at it,” reports Deren. They would ask permission to go out on their routes early or during class breaks to find more people and do more mitzvahs in the hopes of reaching their goal faster.

In the end, they didn’t meet their goal. They surpassed it.

While the idea of wrapping tefillin with 1,000 people was meant to be met in the course of two months, they exceeded their projected number in just six weeks, says Rabbi Ezra Wiemer, 23, who coordinates the Friday routes and runs the mivtzoim program under the guidance of Rabbi Mendel Shemtov. So they raised the bar to 1,500—getting nearly 1,350 in all.

“In honor of the 50th year of the Tefillin Campaign,” he says, “we really pushed ourselves to go beyond the limits of what we have done in the past.”

‘Not Going to Miss Any More Days’

The yeshivah students and guests from their routes, about 50 people in all, celebrated the joint accomplishment this month with a Sunday brunch.

There, Michael Morris, a psychologist by trade who runs a business in the Detroit suburbs, spoke about his first experience with the “Friday boys.”

“I was just sitting in my office on a Friday afternoon and in walks Yisrael Taub and Meir Shemtov, and it was just great. We discussed Torah, and they asked me if I had put on tefillin, and I hadn’t that morning. At the time, I was going to minyan a couple days a week—on Monday and Thursday, and on Sunday—and if I hadn’t put on my tefillin, if I missed [a day], ah, it’s OK, I missed it.

“But when I saw their faces—and I had just spent time with them—I decided that I’m not going to miss any more days on account of you guys,” he said.

Buzz Turner told the audience that the “Friday boys” have been coming to his office for a long time.

“I’m an attorney, and I challenge everything,” he began, only half-joking. “I actually cross-examine [them] every time they come in. And they always come up with great answers. I give them my interpretation, and they just kind of don’t say anything. And then they give me the real interpretation, and it’s very good.

“But one big deal before they leave, as everyone knows: They have to do push-ups, they have to do curls with weights, and then they give me the newsletter and they get two Cokes.”

Rabbi Mendel Stein, development director of the Oak Park yeshivah, notes that he is proud of the students’ extensive outreach in the community: “Our mission, in everything we do, is to share learning and Yiddishkeit with other Jews, no matter where he or she is located.” 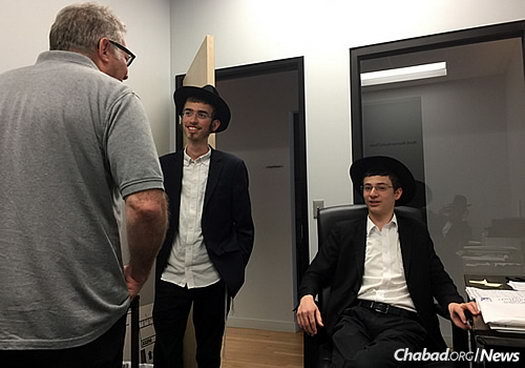 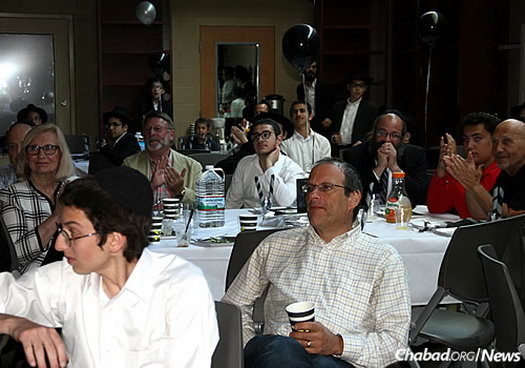 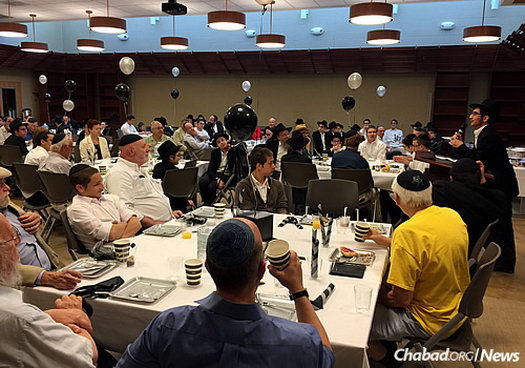 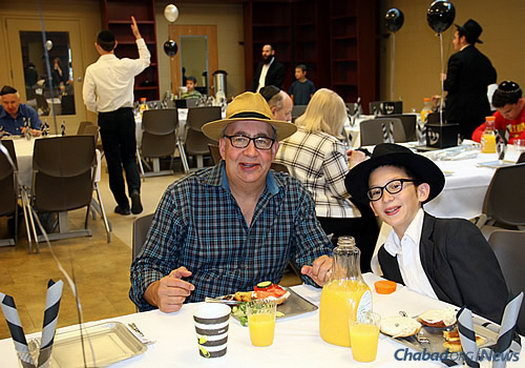 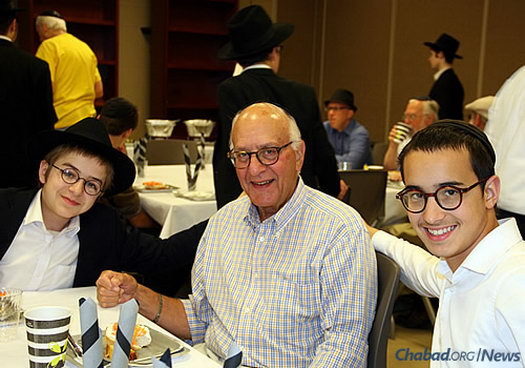