« Calls to Boycott Sears over Hateful Designs
Picture of the Day: Melbourne, Australia » 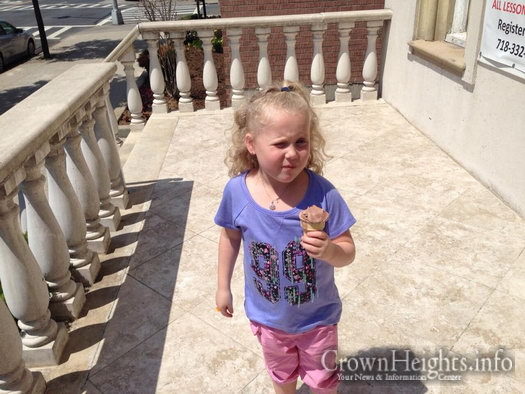 A public school child at a pre-Shavous ice cream party

On the first day of Shavuos, Bochurim from Crown Heights headed out to Public Schools all over the city to conduct their weekly Wednesday “Released Time” hour of Jewish education. On foot, they reached public schools until the far ends of Brooklyn and Queens, some distances of over 10 miles, taking over 3 hours each way.

When they reached the schools, the children then joined the walk to Shul. While walking, a child asked one of the bochurim; “Why are we walking today and I’m driving home like we always do?” When the bochur responded, “Because today is Shavuos and we don’t drive,” the child said, “So, next year I’m not even going to go to school on Shavuos!.”

For the children this was especially unique. Not only were they walking, but now, as each group of instructors came with a full minyon, they had the opportunity of experiencing a Torah reading and hearing the Aseres Hadibros being read from a Torah scroll.

The children then enjoyed special Shavuos foods such as ice cream, blintzes, and chocolate milk.

700 children and parents and other relatives and Friends participated in this special Released Time event.

One parent attending the program was so inspired that she shared with the bochurim that, as a result of her child attending the weekly program, for the past few months her child insisted on wearing Tzitzis every day.

In lieu of returning home, many bochurim remained at the Shuls and Chabad houses to help out with their local Shavuos programs.

The Released Time Program would like to take this opportunity to express appreciation to all the instructors for their devotion and hard work. Likewise they would like to thank Yossi and Batsheva Popack for sponsorship of these events leiluy neshmas Harav Shmuel Aizik popack Harav Reb Avrom Halevi Popack. It would also like to offer a big yasher koach to the shuls and Chabad Houses for graciously assisting with their facilities and Siferei Torah, and for continually being a home where the children from Public School come to learn and experience Yiddishkait.

« Calls to Boycott Sears over Hateful Designs
Picture of the Day: Melbourne, Australia »