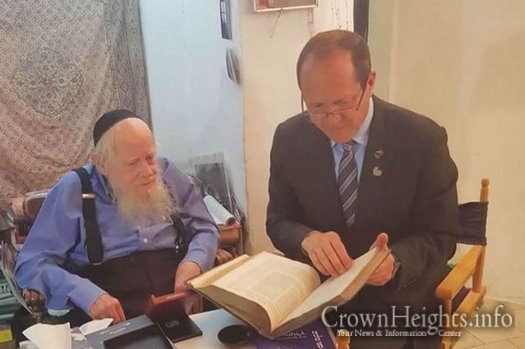 Mayor Nir Barkat of Jerusalem paid a visit to the home of Rabbi Adin Even-Israel-Steinsaltz on Monday afternoon to present the renowned scholar and author with the Yakir Yerushalayim (Worthy Citizen of Jerusalem) medal, which would be presented later that evening to 11 other recipients at a ceremony at the Tower of David in Jerusalem’s Old City.

Steinsaltz, 80, is continuing to recover from a stroke he suffered in December, 2016. Although the rabbi has partially returned to work recently, he was unable to attend the ceremony, the 50th since the award was initiated in 1967.

“It is a great honor for me to present the Yakir Yerushalayim award to a spiritual leader whose writings have gone out from Jerusalem to the entire world and whose books are studied by millions of people, Jews and non-Jews,” said Barkat.

“You express in your personality and your activities the Biblical verse ‘From Zion shall go forth the Torah and the word of G‑d from Jerusalem,’” the mayor added.

The rabbi said he was touched that Barkat presented the award in person and thanked the mayor for the visit.

Even-Israel, who changed his last name in 1991 from Steinsaltz at the suggestion of the Rebbe—Rabbi Menachem M. Schneerson, of righteous memory—is best known for his comprehensive commentaries on the Talmudand the Tanya, the foundational work of Chabad-Lubavitch philosophy penned in 1798 by the first Chabad Rebbe, Rabbi Schneur Zalman of Liadi.

In 2012, he was one of six recipients of Israel’s first Presidential Awards of Distinction.

Two years later, in 2014, he published a long-awaited biography of the Rebbe, from whom Even-Israel sought guidance from when he was a teenager in the Chabad high school in Lod, Israel.

At the ceremony that evening, his son Rabbi Menachem Even-Israel Steinsaltz, director of his father’s Shefa institutions, accepted the award on behalf of his father, saying that it “symbolizes more than anything the tremendous connection between my father and his beloved city and shows the respect and gratitude that the city has for my father’s work for the nation and for Jerusalem.”

Articles, books and videos authored and edited by Rabbi Even-Israel (Steinsaltz) are freely available for study on Chabad.org