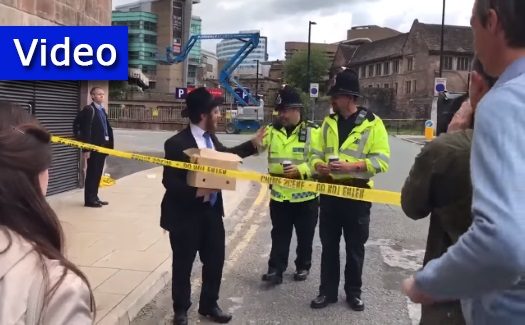 from the Jewish Chronicle:

An Orthodox rabbi was at the scene of the terror attack at Manchester Arena to provide support for emergency workers.

Rabbi Shneur Cohen, of Chabad Manchester City Centre, and his colleagues gave out hot drinks and food to the police.

In a video filmed at the scene by LBC, he can be seen introducing himself and confirming that he is “from the Chabad Lubavitch community.

“We’re here today at the scene showing support for the police that are doing the marvellous work, bringing hot drinks and a Danish to all the officers.

“We send our love and support for all those who have lost lives and those that were hurt in this terrible incident. We are Manchester; we will stand together strong, shoulder to shoulder, with positive acts of kindness. Everyone can do their bit, show a smiling face.

“Today we’re going to stand taller and stronger – go out, do to your neighbour and your friend, an extra bit of kindness. We are Manchester, we will go stronger”.

Police have confirmed that 22 people have died as a result of the attack, with a further 59 in hospital, some of whom are in critical condition.