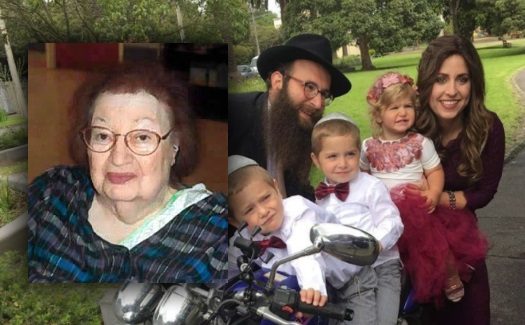 Isolated in an assisted living facility in Peru, Illinois, 100 miles from Chicago, Selma Rosenberg longed for a visit from a rabbi. On the day before her death, she finally got her wish.

Selma Rosenberg had lived a long and rich Jewish life. Born in 1922 in Philadelphia, she was raised in a robust Jewish milieu where Shabbat, Jewish holidays and community set the rhythm. After her marriage, she and her husband, Paul, relocated to Cheltenham, a suburb north of the city. There, she was an active member of her community and her congregation, and served two terms as president of the local chapter of Hadassah.

But all that was in the past.

Approaching her 95th birthday, home was now in an assisted-living facility in Peru, Ill., where her son had moved with his family. Surrounded by cornfields, Peru once had a Jewish community with a small but active congregation and a rabbi in nearby Spring Valley. But that had dwindled over the years.

By the time Selma had arrived in Peru—100 miles from Chicago, the nearest big city—a rabbi occasionally visited to conduct services for the few remaining stalwarts and made it a point to visit her as well. But that stopped, too, and it became rare for Selma to see a Jewish face.

Still, she had visitors. Her daughter in-law, who lived nearby, would come with the grandkids, and her son from Virginia made sure to call and see her as often as he could. And there were kindly local folks who made sure to visit residents in the facility. Among them were pastors of various Christian denominations, who included her on their rounds.

One priest, in particular, tried to convince her to convert to Christianity. “I’m happy to speak to you,” Selma told him during his last visit, “but you’re wasting your time. I was born a Jew, and if G‑d had wanted me to be something else, He would have made other arrangements.”

In the spring of 2017, while on the phone with a friend, Marcia, Selma mentioned that it had been a long time since she had seen a rabbi and how meaningful such a visit would be.

Marcia conveyed Selma’s wish to her niece, Naomi, who promptly logged on to Chabad.org to find the closest Chabad center to Peru. Naomi discovered Rabbi Chaim Telsner, who had recently founded a Chabad center in Normal, Ill., about 60 miles to the south.

The rabbi called the number given to him, but there was no reply. After a few weeks, on May 6, a Friday, he decided to pop in. He took with him a pair of battery-operated Shabbat candles (most facilities do not allow real flames) and a challah baked by his wife, Chabad House co-director Rochel Telsner.

Once there, he found Selma in the dining room.

“I cannot believe it!” she gushed with an enthusiasm that belied her nearly 95 years. “It has been a long time since I have seen a rabbi.”

The two talked for more than an hour. They chatted about Selma’s childhood, her children and grandchildren, her life experiences . . . and she clutched that challah with joy.

When he gave her the plastic candles, Selma shared memories of her mother’s own Shabbat candles and then proceeded to rattle off the blessing said before they are lit.

The two parted as friends, the rabbi resolving to visit the following Friday with his children.

But G‑d had other plans. Selma lit her candles that evening, ushering in the Shabbat Queen. The following night, after Shabbat had departed, she passed away in her sleep.