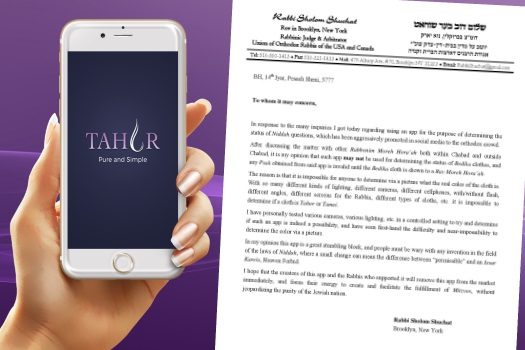 Chabad Rabbi: New Bedikah App Should Be Shut Down

In response to CrownHeights.info’s report today of the release of a new iPhone app for Bedikah Shaalos, Tahor, Rabbi Sholom Dovber Shuchat, a member of Agudas Horabbonim of the U.S. and of the Crown Heights Chabad community, released a statement that in his opinion the app should not be used, and that its creators should shut it down because it will lead to more harm than good.

The following is the full statement released today by Rabbi Shuchat: 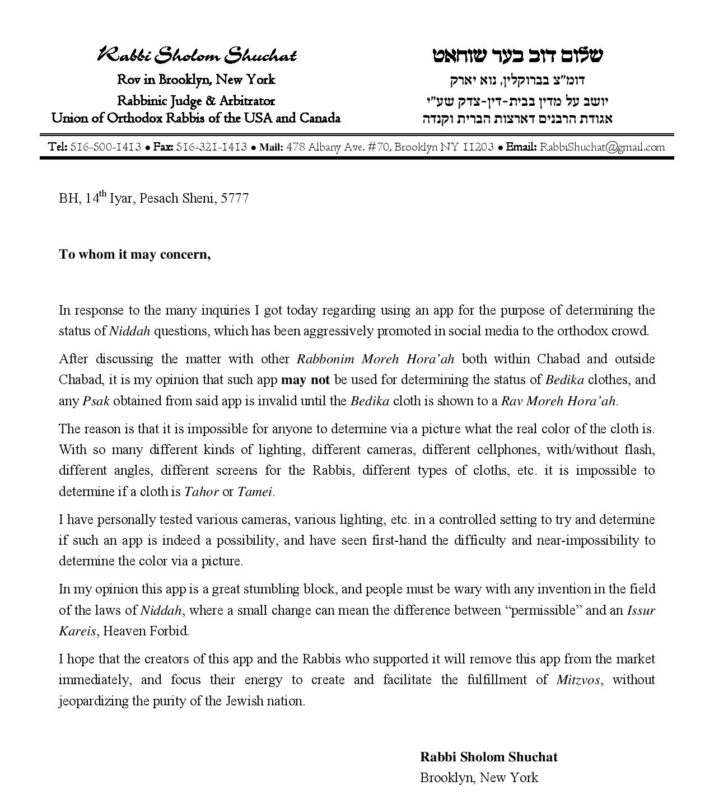 After obtaining this letter, CrownHeights.info reached out to Rabbi Shuchat and pointed out that these concerns may apply to a regular camera, but this app was designed to control for lighting and contrast.

The following is a rough transcript of his response:

When a Rov gets a Mar’eh, there are various things you look at.

This is first seen indoors under regular lighting, and then by a window or outside, when the day is bright, but the sun is not shining on you.

If it was only color, and I was a Rov, and I get a picture, I see it on my phone, which has it’s own contrast, it’s own screen resolution, and I am looking at it in my house, and the lighting in my house interacts with the glass on the screen, and what if the screen is 25% dimmed? And what if my screen is AMOLED and not regular?

He then demonstrated his point by creating a wine stain on a cloth, and used the app to take several photos of it in different shades of lighting.

All four photos are of the same stain of Cabernet Sauvignon.

All four are screenshots from the app.

In all four cases the app said it was good lighting.

Do you think all four stains are the same color?

They are not the same. Even tough the variation between each one is not much, in one photo the stain looks clearly like a Tamei color, while some of the other pictures are not clearly Tamei.