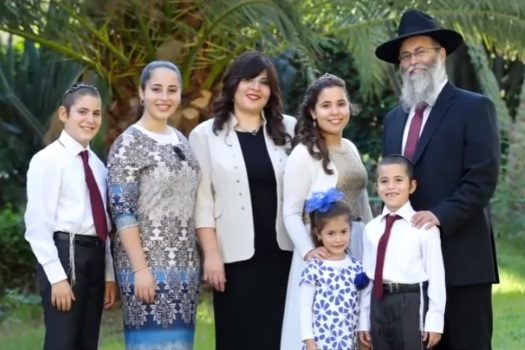 Little Mendy was standing by the door. Behind him a long, gleaming corridor. Only a wheezing interrupted the silence. For years he has lived knowing that his ‘abba is not feeling well’. He still remembers the ‘beautiful times’- he calls it, the times when his Father came back home every day from his hard work as a shochet, tired but happy, giving his warm and loving hugs to his children.

Mendy misses it when his abba dedicated time for each one of the children, time for taking care of the house, for learning Torah, davening, and helping others.

Then came the difficult days. His father became so weak and tired and that he had to leave his job. He began to see doctors, to receive painful and exhausting treatments.

When he came back home from the treatments, the kids did their best not to disturb him and to let him rest, but he always wanted to know more about their lives, about their day at school. It took a lot of energy for him to talk and he really struggled to do it.

Until recently, he did not really know what was happening, and he was not the only one. Most of the friends and acquaintances did not really know. R’ Ben Tzion chose not to share his suffering with the public. He suffered his illness silently and out of bravery.

Mendy’s father was far from home for a long time, hospitalized. And young Mendy realizes that abba is not just ‘does not feel well’, he strongly feels in his young heart that the situation is much worse than that. For the first time in a long time, he was let to see Father.

He stands behind the door, afraid. His heart is accelerating. Capitals of Tehilim for his abba’s recovery are recited by many people all over the country. Young Mendy also says Tehillim, he prefers to do it when nobody is watching, so he can cry his heart out asking Hashem to send refua shelema to his beloved abba.

Recently, the family’s financial situation following his abba’s illness worsened. No one talks about it, and certainly not complains. But for a few years now, abba has not been working because he ‘does not feel well’, and occasionally goes for examinations and visits at the doctor’s office which cost a lot of money. Mendy is not so comfortable with considering the medical costs, abba’s health is top priority, Mendy’s toys can wait.

Mendy felt a soft hand on his shoulder, his mother wakes him from his thoughts. “Let’s go in,” she whispers to him. Mendy takes careful steps towards his father’s bed, trying not to interfere anything on his way.

He looks at his Father, trying so hard to put on a smile. Mendy really wants to burst into tears. But he’s already a big boy and realizes that’s he has to stay strong in front of his father, and smiles back to abba.

Abba’s hand moved a little, Mendy reaches out and holds his father’s hand. He felt the warm, weak hand, tightening around his hand. He looked at his father intently, ‘Mendy,’ he said, not letting go of his hand, ‘make sure to keep them proud of you.’

Those were some of the last sentences Bentzi said, right before he had to give his pure soul back to its creator.

In recent times, in which he could speak, he expressed to his wife and friends his concern regarding the financial burden his family would experience after he passes away.

All of his children: Chaya, Chany, Mendy, Yossi, and Racheli decided to fulfill his will and continue to be sons and daughters for the pride of the family. The family’s close friends, initiated special fundraising days for the family so that the children can do so free from concerns and worry.

Now it is our right and duty to support this family, to open our hearts and pockets, so that their children could grow up just the way their beloved abba Bentzi, wanted them to.