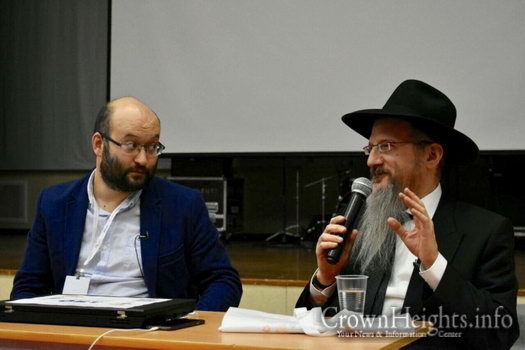 Russia’s Chief Rabbi Berel Lazar warned that French Jews should leave that country if extreme-right presidential candidate Marine Le Pen, who is leading in the polls, should win the election.

Addressing more than 2,000 people at the Limmud FSU conference in Moscow, he stressed that ‘’the situation in Europe is very worrying.’’ ‘’If Marine Le Pen is elected president of France, the Jews must leave,” he said.

Rabbi Lazar also voiced general concern about the rise of nationalism across Europe. “The situation there is very worrying. Not only because of immigrants, but also because the general population is heading toward radicalization. The best example of this is the rise of extreme-right parties.”

In his speech, Lazar said that Russian President Vladimir Putin has done more for the Jewish community in Russia including fighting anti-Semitism than any other Russian leader.

“Putin was the first president to publicly speak out against anti-Semitism and did the most for the Jews in Russia,’’ he said, as he insisted that ‘’there is no institutional anti-Semitism in Russia where the attitude toward the Jews is excellent.”

The rabbi declared: “In contrast to (former Russian leaders- Gorbachev and Yeltsin, who were not interested in hearing about the situation of the Jews in Russia, Putin was the first to say that anti-Semitism has no place in Russia. He was the first to speak publicly against anti-Semitism, and did the most for the Jews in Russia. This is not self-evident, nor is it obvious that there can be a conference in Russia today like the study of FSU with more than 2,000 Jews.”

Evoking recent anti-Semitic statements by Russian parliamentarians, Lazar said, “It’s just a drop in the ocean. These statements are of course inappropriate, but they are not the end of the world either. Our goal is to have a finger on the pulse and raise the issues on the political level in order to protect the Jewish community. We must cooperate with the government as long as it protects us.”

Lazar also defended Putin for his role in supporting Syrian President Bashir Assad. “It is not certain that there are better options for Syria than Assad. The Arab spring did not produce positive results. It seems that the Arab countries are not yet ready to accept the rule of democracy.”

When asked about recent media reports linking US President Donald Trump and Chabad, Lazar said: “I do not like that people are intentionally looking for ties between Trump and Chabad or between Trump and the Jews in general. The only thing I can say it, it’s excellent that Ivanka Trump is Jewish, and that Trump’s grandchildren are Jewish too, but I have nothing to add beyond that.”

Before the U.S. presidential election, Ivanka Trump and her husband Jared Kushner visited the grave of the late Lubavitch Rabbi Menachem M. Schneerson, in Queens, N.Y. The site is popular among Orthodox Jews seeking a blessing and inspiration.

Since its inaugural conference in Moscow in 2006, Limmud FSU (former Soviet Union) has created an independent educational and communal network of annual conferences and festivals, attracting more than 45,000 participants in Russia, Ukraine, Moldova, Belarus, Israel, North America and Australia. Limmud FSU engages young Russian-Jewish adults, empowering them to take ownership of their identity and to connect with their communities through pluralistic, egalitarian volunteer-driven conferences of Jewish learning and culture.