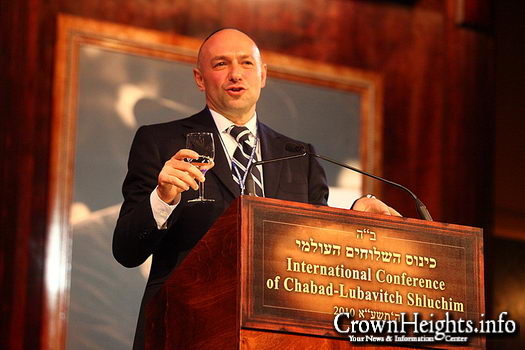 Ukrainian billionaire Gennadiy Bogolyubov tells the UK Jewish News how he reconnected with Judaism and set up Jewish hubs in London and at home in Dnepropetrovsk.

from the Jewish News by Justin Cohen:

If you’d told a young Gennadiy Bogolyubov that a synagogue he conceived in the heart of London would be the obvious setting for an interview with the future oligarch he may have choked on his bacon sandwich.

But little of the 55-year-old’s life to date has been predictable. Having grown up in the Soviet Union, where “people who saw a rabbi walked across the road because Judaism had been suppressed for 70 years”, the businessman admits he didn’t even know his local shul was a couple of blocks from his home.

A quarter of a century later, Bogolyubov (his adopted name meaning God-loving) has long since ditched non-kosher food for shul kiddushes and he’s very much at home at Chabad of Belgravia, where he recounts a journey which began with a “miracle” meeting.

“I remember the day in 1995, when my business partner asked about going to the rabbi for Friday night dinner. I said no the first time,” the major Chabad donor told Jewish News during a rare interview. “When he asked a second time, I agreed but suggested we don’t bring our wives as I didn’t know what to expect.”

Bogolyubov recalls a shul building that wasn’t well kept “and I wasn’t impressed by the synagogue or the Torah – I was just not interested”. His interest was ignited, however,  when he was told that the shul’s soup kitchen served anyone in need.

Click here to continue reading at the Jewish News.