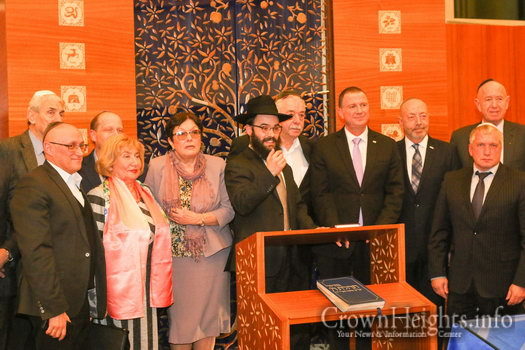 The Speaker of the Israeli Knesset, Mr. Yuli Edelstein, visited the Jewish community in Tallinn, Estonia, last Thursday as part of his official country visit. Edelstein visited Tallinn’s Grand synagogue and was welcomed by the members of the local community and dignitaries – a meeting that developed into an intimate meeting.

“Edelstein’s visit was a huge inspiration for our small community. To meet a man who grew up in the same familiar anti-Jewish Soviet environment and nevertheless strived to keep his Jewish identity under all circumstances, it was very inspiring,” said rabbi Shmuel Kot, chief rabbi of Estonia.

Edelstein was born in Chernovtsy, Ukraine, under the Soviet rule. Even though his family was assimilated, Edelstein covertly learned Hebrew and became a Zionist activist. He spent three years in Gulag labor camps on fabricated charges for his desire to immigrate to Israel and was finally released in 1987.

Edelstein’s visit was very meaningful for Tallinn’s Jewish community, which began to develop not long ago, with Tallinn’s synagogue opening in 2007, the first in Estonia after World War II.

As part of his visit, Edelstein also met with Estonia’s Prime Minister and top government officials, who noted their warm relations with the community.