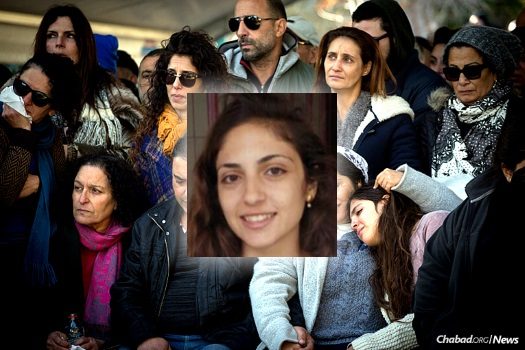 Family and friends mourn at the funeral of 22-year-old Lt. Shir Hajaj (inset).

To an outsider, the claims of Israeli society as a tight-knit family might sound like a cliché, but when it comes to times of tragedy, this reality takes on even greater truth.

For the Colel Chabad family, the terror attack in Jerusalem on Sunday directly struck its extended community. Among the four young victims—all of them soldiers in the early months of their training—was a dedicated Chesed Menachem Mendel tutor, Shir Hajaj, only 22 years old.

A resident of the Jerusalem suburb of Ma’ale Adumim, Lt. Hajaj was the eldest of four daughters in her family and was an honors student in school. Despite being an active service soldier, Hajaj also worked with the local branch of Colel Chabad and the Chesed Menachem Mendel program, and has been spending time tutoring a local teenager whose father passed away from an illness three years ago. Her last session was completed on Saturday night, just hours before she would leave her home and family for the very last time.

Hajaj, whose quiet smile is now sadly featured on newspaper covers and Israeli broadcasts, tutored in physics and math. Her student, a 16-year-old in high school, was preparing for her physics bagrut (matriculation exam) and getting ready to begin preparing for math exams as well. Returning home after what would sadly be the final lesson, the student told her mother how much she appreciated having Hajaj as a teacher.

Leah Babayof, who serves as the coordinator for Colel Chabad in Ma’ale Adumim, said she had spoken with Hajaj several times over the course of her volunteering. “This was a young woman who truly wanted to help her student. Upon meeting her, you were immediately impressed by her maturity and desire to help others.”

Hajaj’s funeral was held on Monday afternoon at the Mount Herzl Military Cemetery.

“Perhaps were it not for this tragedy, the world would never have gotten to know about Shir’s dedication and remarkable caring for others,” said Rabbi Sholom Duchman, director of Colel Chabad. “But she is a true example of what it means to be humbly performing charity, and we can only hope that this remarkable lesson will offer some comfort to her family and friends during this tragic time.”