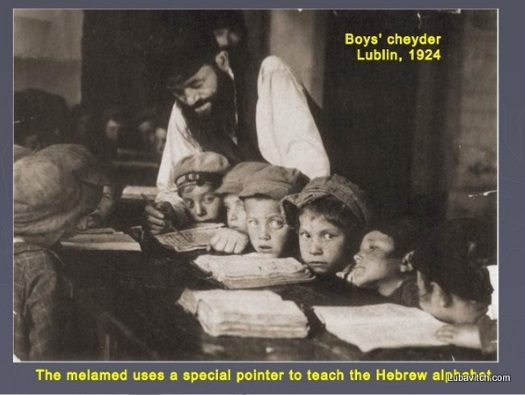 Four generations later, a Swedish Jew traces his roots to a Melamed teaching his pupils in an iconic black-and-white photo taken in the Polish town of Lublin in 1924.

from Lubavitch.com by Leah Namdar, Shlucha to Gothenburg, Sweden

When I look at photographs of Jewish life in Europe before the Holocaust, I often wonder who the people in this picture were. Did they survive the Holocaust? What were their names? And who are their children? Where are they now?

Last night, the second night of Chanukah, we learned about one of the people in one of these famous photographs. It is one you’ve probably seen before, of a melamed, a cheder teacher, leaning over the table, pointing to the pages of a well-worn Chumash, teaching sweet faced children with beautiful, innocent eyes. The melamed’s face is focused on transmitting the holy words of the Torah to his precious students. You can almost hear the children chanting in clear, childish trebles. Who knew what awaited them…

Jacob Sznajdman was here this evening. A refined, highly intelligent young man, he comes over quite often to visit, to daven and spend Shabbos with us. He became good friends with our son, and lately he bought his own pair of tefillin. Tonight he joined us for dinner and lit the menorah.

He told us about his recent visit to Lublin, where his grandfather was born. Then he showed us a photo of his great grandfather… the melamed of that iconic image.

Shaul Sznajdman was his name. His son was Izak or Izydor, who escaped to Russia during the war, returned to Poland and then moved to Sweden in 1969. He had a great love for the Yiddish language and taught Yiddish in our community. His son Michael was born in the Soviet Union, raised in Poland and lived in Sweden. And his son Jacob is continuing in his great grandfather’s ways. Learning more about Jewish life and practice. Discovering his family’s roots. Four generations later…

I can’t even imagine the joy in heaven when Jacob dons his tefillin!

“I think I’ve always felt a responsibility. There was this whole family tree and I have to make sure that it continues along with spirit of my ancestors.” Growing up in Sweden, he said, he always felt some dissonance.

If a Jew is raised in Sweden, he or she knows that their family history is different from everyone else’s. “And yet we were raised like everyone else, living mostly the Swedish way. But knowing that I have ancestors who were dedicated to Judaism makes me proud and also makes me feel like I belong in a Jewish community.”

Jacob said that he recently began taking a strong interest in Judaism.

“I enjoy learning small parts of Judaism. To be able to read and sing. I don’t yet tackle the the big books but I learn small things and talk about things with Dani. I hope I can build a Jewish home and find a balance between my work, music interests and Jewish life.”

Looking at the flickering flames in Jacob’s oil menorah this evening, I think his great grandfather would be proud.

Leah Namdar lives in Gothenburg, Sweden with her husband Alexander, where they have been serving as Chabad shluchim since 1991. You can learn more about Chabad of Sweden by visiting their website, www.chabad.se.