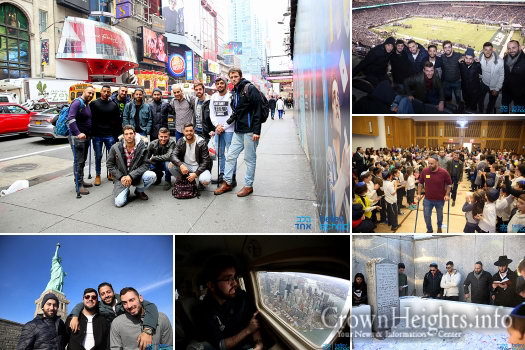 A group of Israel Defense Forces soldiers wounded in terror attacks and as part of “Operation Protective Edge” in the summer of 2014 recently spent 10 days touring New York City, thanks to a program called Belev Echad.

During their stay in New York, the 11 Israeli veterans saw New York landmarks such as Times Square, Central Park and the Statue of Liberty; visited the 9/11 memorial and the Intrepid Sea, Air & Space Museum; explored “Ripley’s Believe It or Not!” and Madame Tussauds tourist destinations; watched professional sports games and enjoyed some bowling; got an aerial view of the city from the seats of private Cessna aircraft; spent time with members of the Jewish community at day schools, local events and a gala banquet dinner; and visited the Ohel—the resting place of the Lubavitcher Rebbe, Rabbi Menachem M. Schneerson, of righteous memory.

The program was founded in 2009 by Rabbi Uriel and Shevy Vigler, co-directors of Chabad Israel Center on New York’s Upper East Side, and a host of supporters from the New York area. It aims to show the Jewish people’s gratitude to IDF veterans for putting their lives on the line to protect and defend Israel, and allows the soldiers to take time away from their rehabilitation and enjoy themselves for a while.

“These brave IDF soldiers have risked—and nearly lost—their lives to protect the people and the sacred land of Israel,” says Vigler. “The community is immensely grateful for the commitment and sacrifices they have made. It has been my pleasure to introduce these heroes to our supporters and help them realize just how much we appreciate their service.”

Shimon Shkury, a Belev Echad supporter, and founder and president of Ariel Property Advisors, agrees: “Belev Echad is an incredible project because it deepens the bonds between the American Jewish community and Israelis. As an Israeli-American, I feel that it is our responsibility to strengthen our ties with Israel and to support the Jewish homeland in any way we can. There is no better way to support Israel than by investing in the well-being of its soldiers and veterans.”