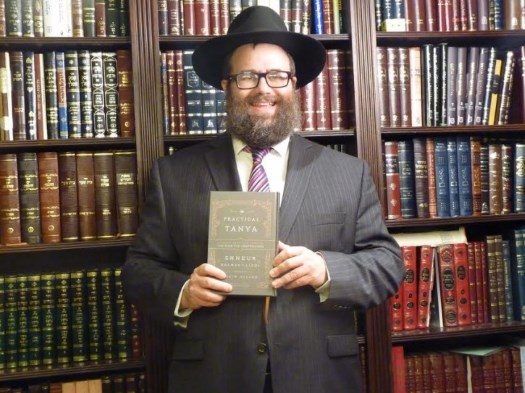 An 18th century sefer that is the cornerstone of the Chabad Chasidic movement is about to become more accessible to English speakers with the release of a contemporary translation of the highly sought after work on Jewish thought.

Rabbi Chaim Miller, chief editor of Kol Menachem publishers, spent more than two years creating a modern translation of the Tanya, the only one of Rabbi Shneur Zalman of Liadi’s many writings to be published in his lifetime.

While Rabbi Miller’s is not the only English translation of the Tanya, he considers it to be the most relatable to today’s society.

“This is quite an important book studied all over the world but I have always felt that the translations were pretty archaic and didn’t really speak to the modern reader,” Rabbi Miller told VIN News.

In fact, it was his own study of Tanya approximately 20 years ago that drew Rabbi Miller, who came from a traditional Jewish background, to a strictly observant lifestyle.

“I picked it up for the first time as a college student and it spoke to me,” recalled Rabbi Miller.  “I wasn’t affiliated with Chabad then but I spent a whole year studying it.

At the time Judaism was part of my identity, but a confusing part, and until then I had never really discovered a book that spoke to the inner questions and struggles that we all have.”

While Rabbi Miller had intended to become a doctor, he left medical school for yeshiva, eventually becoming ordained as a rabbi.

Drawing on his own education at London’s prestigious Haberdashers’ Aske’s School, Rabbi Miller went on to become a prolific author and lecturer.

Kol Menachem’s The Practical Tanya breaks new ground with updated English terminology for concepts and ideas that were never properly articulated before, according to Rabbi Miller who confessed that translating a body of work that deals heavily with spirituality, mysticism and practicality into relatable verbiage was no small task.

“I don’t think we have every really developed a language of spirituality in English and there is some academic language that is very ivory tower,” noted Rabbi Miller.  “But there are real gems of wisdom here that are timeless and hopefully we have unpackaged them and made them more accessible.”

Dealing with the existential questions of an individual’s emotional quests and personal relationship with his creator, Tanya has been studied for more than 200 years by Jews all over the world.

Despite having been written in the18th century, the 53 chapters of the Tanya address issues that are as timely today as they were generations ago, a factor which contributes to its continued popularity.

“Tanya is unique,” explained Rabbi Miller. “Unlike most other works of mussar it validates the struggles we face and the author says clearly that it is intended for real people, not just an abstract work.”

Among Kol Menachem’s other English Judaica publications are the Gutnick Chumash,  the Rambam’s 13 Principles of Faith and the Lifestyle Torah, which was printed in a special, camouflage covered edition that was distributed to several thousand members of the United States Army as previously reported on VIN News (http://bit.ly/2fSUXk8).

Rabbi Miller hopes that The Practical Tanya, which is due to be released on December 8th, will impact the lives of others much as it did his own.

“My goal is to make Jewish mussar and mysticism relatable to Jews of today by addressing their struggles,” said Rabbi Miller.  “The struggle of life is managing the confusion we have in our minds about our purpose, about G-d and about the emotional and mental turbulence that we all have.”

Details of the work: http://kolmenachem.com/itemdetail.asp?ItemID=35.