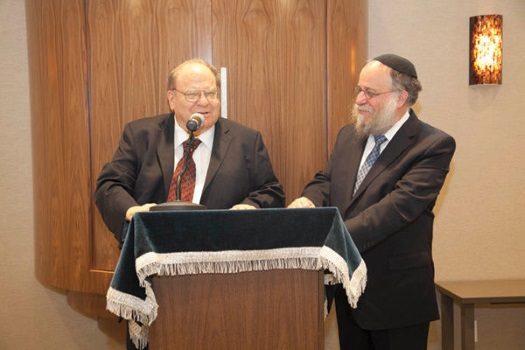 Richard Teitelman, who was the first blind and the first Jewish Missouri Supreme Court justice, died Tuesday at his home in the Central West End. He was 69.

Teitelman had served on the Supreme Court since 2002. Prior to that, he spent four years as a judge with the Missouri Court of Appeals and two decades with Legal Services of Eastern Missouri, a St. Louis-based nonprofit that provides legal assistance to low-income people.

The judge was known not only for what he achieved despite being legally blind but also for his liberal ideology, compassion for underprivileged Missouri residents and friendly manner with others in the legal world.

In honor of Teitelman, the court cancelled oral arguments scheduled for Tuesday.

As a Supreme Court Justice, “he would frequently say out loud his approach to each individual case: ‘Look for the justice in the case,’ ” said Michael Wolff, who served on the court with Teitelman and is now the dean of St. Louis University Law School. “He was a brilliant lawyer. He was a great strategic thinker, and he had the biggest heart of any of us in the legal profession.”

Teitelman was named to fill a vacancy on the Supreme Court by Gov. Bob Holden.

“I am very, very proud, very humbled at being the first Jewish judge on the Supreme Court in Missouri,” the judge told the St. Louis Jewish Light at the time. “I read incessantly about Jews, especially Jews in St. Louis, and I get my commitment to justice from the Torah.”

Teitelman was born Sept. 25, 1947 in Philadelphia. His father, Nathan, was a lawyer and his mother, May, worked in the home. Public school officials wanted to send Teitelman to a school for the blind but his mother “would have none of that,” and began attending school with her son, said Maurice Graham, an attorney and friend. Teitelman received his bachelor’s degree from the University of Pennsylvania and then attended the Washington University School of Law.

Teitelman faced unique challenges in the legal world because of his blindness. In hearing cases on the Supreme Court, whereas other justices could refer to their notes, Teitelman essentially had to memorize all the material involved in a case, said Richard Bernstein a fellow blind, Jewish Supreme Court justice in Michigan.

The two met in 2015 when Bernstein participated in a panel at a Chabad legal symposium in St. Louis. Bernstein started hearing about Teitelman when the judge was appointed to the Missouri Supreme Court and said that main reason he came to St. Louis was to meet Teitelman.

“Within the disabled community you tend to know that there are certain people doing things that you get excited about,” said Bernstein.

Teitelman participated in other Chabad events as well, including for the last five years at a menorah lighting at the Governor’s Mansion in Jefferson City.

“It was a tall menorah and we had to always help to get the candle (lit) because it was hard for him to see,” said Chabad of Greater St. Louis Director Rabbi Yosef Landa. “Whenever he was able to participate in Jewish events, I think he relished the opportunity.”