« Video: Behind the Scenes of the Kinus Photo
Picture of the Day: Giving Thanks » 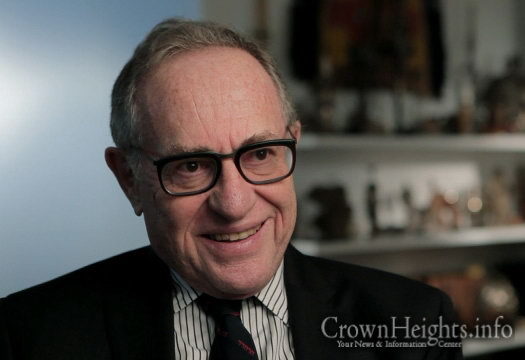 Dershowitz called the lengthy jail term that was imposed on 57-year-old father-of-10 Sholom Rubashkin — former CEO of Agriprocessors in Postville, Iowa, which went bankrupt in 2008 — “unfair.”

Dershowitz said he agreed with the sentiment expressed by Charles Renfrew and James Reynolds in the Wall Street Journal — that federal prosecutors in the case —  which saw Rubashkin convicted in 2009 of illegally moving money that was supposed to be used as collateral for a loan — sought to “extract a pound of flesh, and then some — even at the cost of illegally overstepping their bounds and interfering in the bankrupt company’s sale.”

“Mr. Rubashkin has now served upwards of seven years of his sentence — more than twice as much as he would have served had his punishment fit his crime,” they claimed. “Every day that he spends in prison is a day that he should be spending as a free man, with his family.”

This, they argued, “is why we urge President Obama to pardon Mr. Rubashkin before he leaves office in January.” Furthermore, they said, “Congress should also take steps to rein in the serious problem of prosecutorial abuse, which has elicited bipartisan concern from many lawyers, legal scholars and federal judges.”

US presidents generally issue a slew of pardons at the end of their terms in office.

« Video: Behind the Scenes of the Kinus Photo
Picture of the Day: Giving Thanks »