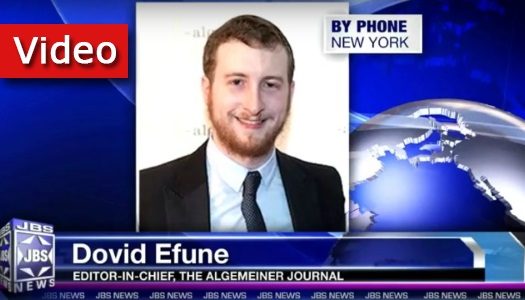 With Donald Trump set to enter the White House in January, American Jews should adopt a “constructive and collaborative” approach in the fight against antisemitism, editor-in-chief of The Algemeiner Dovid Efune said in an interview with the Jewish Broadcasting Service this week.

Speaking with Mark S. Golub — host of the “In The News” program, Dovid Efune recommended that the incoming Trump administration formulate initiatives to stem the types of hatred — including antisemitism — that popped up at times, on both the right and the left, during the heated presidential campaign season.

“An initiative together with Twitter would be a fantastic idea…to block users who are tweeting aggressively, harassing Jewish journalists,” Efune said.

“The truth is, it should be an ongoing effort in our society to stamp out this kind of hatred, keep it relegated to the margins and not allow it to gain the kind of traction that it has,” Efune continued.

Watch the full interview below: