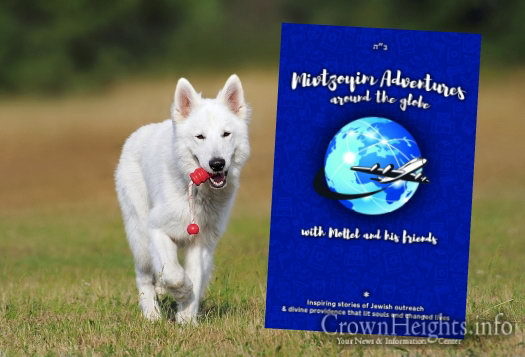 A new book was published which aims to inspire children with true stories of Hashgocha Protis that were encountered while on Mivtzoim. We present one story from the book, in which Bochurim visited a man who wouldn’t agree to put on Tefillin, until his dog did something unexpected.

Going around on Mivtzoim during Chanukah, Mottel and Mendy had just come into a house to make a grand Chanukah party. “Chag Sameach, Baruch!” said Mottel. Baruch was an older man that Mottel and Mendel would visit and after a while they developed a strong connection.

One week before Chanukah when Mottel and Mendy were getting ready to leave Boruch’s house, he turned to them and said, “You know what? I want to host a Chanukah party in my house. Please tell all the Jews you visit to come to here so we can celebrate together. I’ll take care of everything.”

From then on, Baruch would host Chanukah and Purim parties for everyone on Mendy and Mottel’s route. But after a while, Mendel and Mottel stopped seeing Baruch. They knocked on the door, and rang the bell, but nobody answered. Months passed and there was no trace of Boruch. “Why try anymore?” said Mendel. “Let’s try one more time,” said Mottel, walked over and rang the bell.

To their surprise, the door opened and out walked Baruch with grandson Max, dressed in a sports uniform. “Sorry,” he said. “I have no time now; I have to get my grandson to his game.” Mottel turned to Max, “Can we first do a quick mitzvah with your grandfather?” he asked. “It’ll only be two minutes.” “Okay,” said the boy, and they turned back into the house.

“Hey, where’s the cover of the Tefillin?” Mottel asked. They were taking off the Tefillin when Mottel noticed that the little protective “shaidel” box was missing.

“Maybe it fell under the table,” suggested Mendy. “Maybe it bounced under the couch,” said Max. But wherever they looked, they couldn’t find it.

“Hey look!” said Max. Just then the family’s large and scary-looking dog Oscar trotted in from the next room, the Tefillin cover was being crunched and bitten in his mouth! “Oh, no!” said Baruch and they tried to get it out of Oscar’s mouth.

They succeeded in getting the shaidel out of the dog’s mouth with the assistance of a kosher candy they had brought, but Mottel saw that it was cracked with teeth marks. “I’m so sorry!” said Baruch. “Can it be fixed? Can I pay you to buy a new one?”

Mottel was about to dismiss it when he heard himself saying, “These Tefillin were used with many Jews and many mitzvos were performed with them. Now they’re being chewed on by Oscar the dog!”

Hearing this, Baruch’s face fell. “What I can do?” he asked, clearly bothered by what happened. “I’ll tell you what,” said Mottel, “since these Tefillin are holy, and now they were disrespected, let’s add in their holiness and show our respect to them. Maybe you can resolve to put on Tefillin each day!” Baruch thought, and agreed. “Okay” he said, “for the next month I will put on tefillin every day to show respect to the Tefillin.”

Mottel kept in touch with Baruch and he indeed kept his resolution. Mottel keeps that dog-bitten shaidel in his own teffilin bag to this very day, for this shaidel was a cause for this great mitzvah – similar to the ‘broken Luchos were also kept in the Aron Kodesh’.