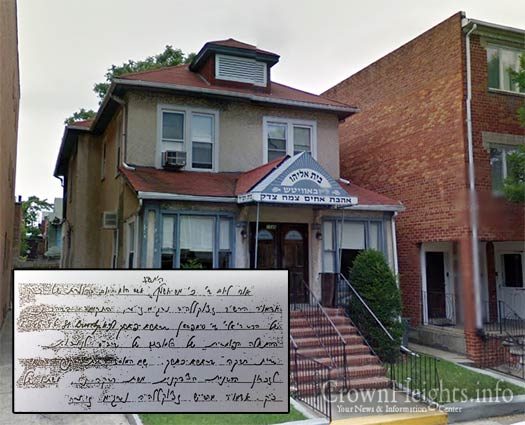 A recently discovered note believed to be written by Rabbi Chaim Mordechai Eizik Hodakov, the chief secretary of the Lubavitcher Rebbe, pegs the birth date of the Beis Rivkah network of schools on this day – Chof Cheshvan, 5702 (1941) – which is the birthday of the Rebbe Rashab.

The note, which was recently unearthed and sent to CrownHeights.info, is believed to have been written by Rabbi Chaim Mordechai Eizik Hodakov, in which he declares the date – Chof Mar Chesvan 5702, November 10th, 1941 – as the date of the founding of Beis Rivkah, and that it is named after the mother of the Rebbe Rashab, Rebbetzin Rivkah.

The note states that the “first public day of classes” was held in the Shul of Rabbi Eliyahu Simpson, who was the secretary of the Frierdiker Rebbe, on 46th Street in Boro Park.

The following is a free translation of the note:

Or L’Yom Beis, Chof Mar-Chesvan, 5702, which is the day of the birthday of the Rebbe Rashab, took place in the Shul of Rabbi Eliyahu Simpson at 1546 46th Street in Boro Park the official start of learning of the school for girls, Beis Rivkah in Boro Park. The name of the Moisad, Beis Rivkah, is in memory of Rebbetzin Rivkah, the wife of the Rebbe Maharash.

Students in Beis Rivkah High school on Crown Street marked this day with a special program.