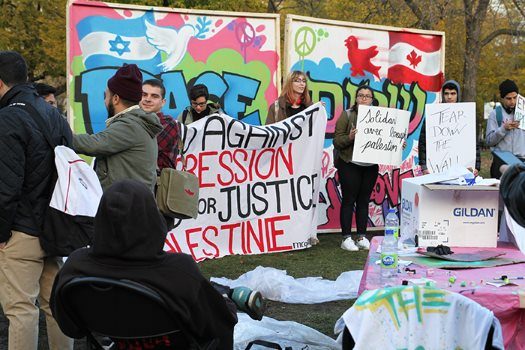 Earlier this month, Chabad at McGill University in Montreal hosted an event that soon attracted protesters, including members and supporters of the anti-Israel Boycott, Divestment, and Sanctions (BDS) campaign, who tried to block it off and prevent other students from participating.

From the McGill Tribune:

As part of the event, which was called Artists 4 Israel, Chabad McGill erected a section of wall on which participants could paint murals.

According to Eva Chorna, a U1 Science student and member of Chabad’s student board, the event was intended to promote positive messages.

“Basically, what we tried doing with this event [was] we brought a group of artists [who] came to spray paint a mural on which we were promoting a really peaceful and inclusive message for coexistence,” Chorna said.

According to Chorna, the event was designed to bring together people of different backgrounds and political views through a common medium–art. The event was not related to Israeli-Palestinian relations.

Click here to continue reading at the McGill Tribune.