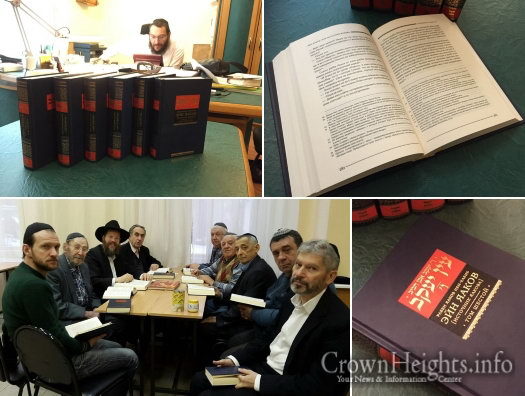 Hot off the press came the sixth and final tome of Ein Yaakov, which has been translated for the first time ever into the Russian language along with all its commentaries. This project was initiated by Chief Rabbi of Russia, Berel Lazar, with the generous help of the Rohr family.

This comes as excellent news to many Jews who participate in Torah classes on a regular basis in their communities all over the former Soviet Union (FSU).

Ein Yaakov is a compilation of all the Aggadic material in the Talmud Bavli as well as Yerushalmi. It was compiled by Rabbeinu Yaakov Ben Chaviv who lived in the times of the Spanish Inquisition. It was later completed by his son the Ralba”ch, Rabbi Levi Ben Chaviv, one of the great rabbis of Yerushalaim. Throughout the generations, Jews have gathered together to learn Ein Yaakov, and now with a Russian translation available, many more Jews in Russia will be able to take part in these study groups.

The translation was overseen by the Editor in Chief of LeChaim Publications, Rabbi Boruch Gorin, who, along with a group of talmidei chachamim and experts, has already published hundreds of Jewish books in Russian, which are studied on a regular basis by Jews throughout the entire FSU.