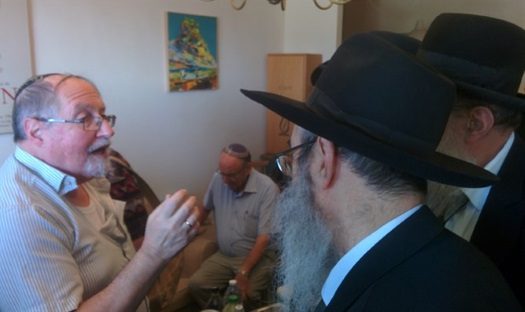 Representatives of the Chabad movement paid a condolence visit to the home to the Vice President of the Israeli Supreme Court Elyakim Rubinstein. Justice Rubinstein is sitting shiva for his daughter, who passed away after a long illness.

During the visit, Justice Rubinstein spoke of his relationship with the Lubavitcher Rebbe, with whom he met on behalf of former Prime Minister Yitzhak Shamir.

“There’s a famous video where you can see the Rebbe speaking with me about territorial integrity and asking what Prime Minister Shamir planned to say to the Americans about that issue.” Rubenstein said. “The truth is that I was sent by the Prime Minister to the Rebbe speak about a different but equally important matter, the conversion issue and the solution to the question of who is a Jew.”

“As we know, this issue greatly concerned the Rebbe. As soon as I brought it up he said, “What will be, will be.” He would then change the subject to another matter entirely and wouldn’t give me an opportunity to present a solution. It’s an interesting fact you didn’t know.” Rubinstein added.