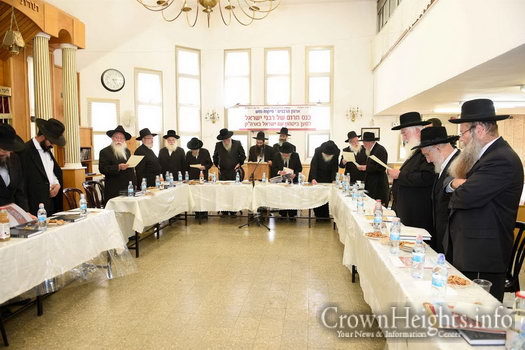 The Rabbinical Congress for Peace (RCP), which comprises over 400 rabbis from all over Israel, has sharply criticized Defense Minister Avigdor Lieberman for declaring that he supports a two state solution and is even willing to “be the first investors in the rehabilitation of the Gaza Strip,” and “the first to invest in a maritime trading port, an airport and an industrial zone.”

“It seems as if the Defense Minister has been out of the country for the last 25 year,’ said Rabbi Avrohom Shmuel Lewin, “or else he would have realized that statements like these serve as an incentive for more violence and bloodshed.

“Lieberman’s remarks such as “we don’t need certain parts of Israel,” convinces our enemies that we don’t need to be here at all. If after a year of continuous terror and murder Minister Lieberman is still prepared to give the terrorists a prize in the form of a state of their own plus an airport and sea port this emboldens the terrorists to increase terror attacks and more pressure to receive their state on a platter of blood, G-d forbid,” said Rabbi Lewin.

The rabbis also sent a letter to the Prime Minister asking that he fire Lieberman. “The defense minister’s job is to protect Israeli citizens and not to encourage terror. Lieberman’s words endanger the security of Israeli citizens. “A two state solution” must be erased from the lexicon before we all see the dangers it leads to.

Rabbi Joseph Gerlitzky, rabbi of central Tel Aviv and chairman of the RCP, will convene a meeting of the group to discuss ways how to counter Lieberman’s position.

“Precisely today when Israel begins to learn the Book of Genesis,” said Rabbi Gerlitzky, “where the noted commentator Rashi comments on the first verse and asks ‘why does the Torah begin with the story of Genesis? Because He wished to convey the message of the verse ‘The power of His acts He told to His People in order to give them the estate of nations’. ‘So if the nations of the world will say to Israel ‘you are thieves for you have conquered the land of the seven nations who inhabited the land o Canaan’ Israel will say to them. ‘The entire universe belongs to the Holy One Blessed is He. He created it and gave it to the one found proper in His eyes. By His wish He gave it to them and by His wish He took it from them and gave it to us.’”

This is the official position taken by the nation of Israel and the Torah of Israel to proclaim that the entire Land of Israel belongs to us because this was the wish of the Creator of the world and nothing can ever change that. This is the only way to eradicate terrorism and nothing else.”