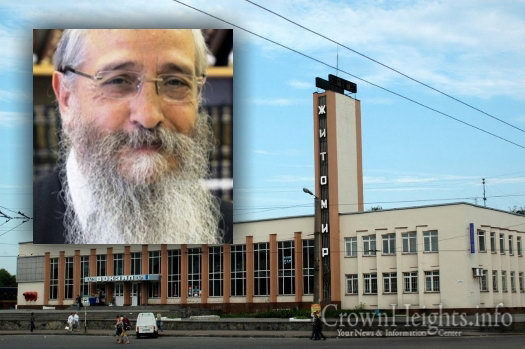 The Zhitomir train station, near which the attack occurred. Inset: Rabbi M.M. Deutsch.

On Friday morning, Rabbi Mendel Deutsch, a prominent Chabad activist from Jerusalem, was savagely beaten nearly to death in the Ukrainian city of Zhitomir. After Shabbos ended, the Shliach to Zhitomir, Rabbi Shlomo Wilhelm, gave an update on his situation.

On Friday, after he was rushed to the hospital, Rabbi Wilhelm arranged for the top surgeons in Kiev to travel to Zhitomir and perform emergency operations on Rabbi Deutsch.

On Shabbos, the victim was flown in severe but stable condition to Israel, where he is currently being treated at Tel Hashomer hospital.

Rabbi Wilhelm said that the incident was not a common occurrence in Ukraine, and that the perpetrators were apparently a band of drunks who attacked the victim in order to rob him.

Deutsch has been active in strengthening Jewish life in the former Soviet Union for many years, and is a central organizer of hospitality and programming at the burial site of the Alter Rebbe in Haditch, Ukraine, where Deitsch is believed to have spent Rosh Hashanah.

The rabbi’s injuries remain life-threatening, and the family asks that people to continue to pray for the full recovery of Menachem Mendel Mordechai ben Miriam.