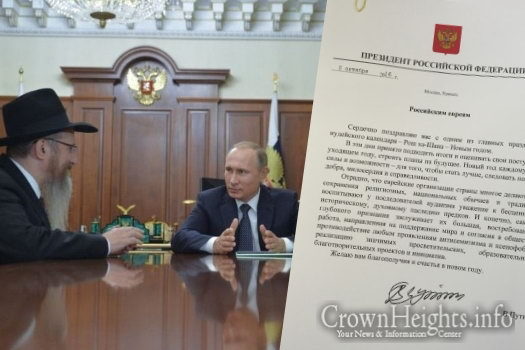 The President of Russia, Vladimir Putin, issued greetings to the country’s Jews on the occasion of the Rosh Hashana. The official greetings letter, received by the office of chief rabbi Berel Lazar on Sunday, wished Russian Jews “happiness and prosperity in the new year.”

“I full-heartedly congratulate you on one of the main holidays of the Judaic calendar, Rosh Hashana, the New Year,” Putin’s letter said. “The new year gives  everyone the force and determination to follow the path of kindness, justice and humility.”

In the letter, Putin also noted the important role Jewish organizations and communities throughout the country play in helping it combat anti-semitism and xenophobia, as well maintaining the country’s moral and ethical values. “These educational, philanthropic projects and initiatives deserve a deep gratitude,” the letter said.

The letter, which is President Putin’s annual greeting on Rosh Hashana, has also been published in mainstream Russian media.