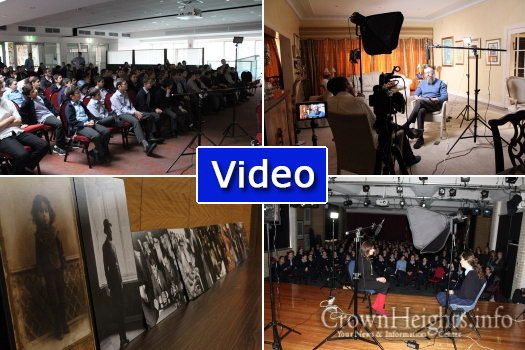 Renowned for kangaroos and boomerangs, Australia is not usually first to mind when thinking of the Rebbe and Chabad. However, Australia possesses a treasure trove of people with close relationships with the Rebbe and myriads of encounters and stories of the Rebbe.

It was to this fertile ground Rabbis Yechiel Cagen & Zalman Groner of JEM’s My Encounter with the Rebbe project took their cameras and microphones. Their recent two and a half week stint “Down Under” featured their toughest schedule yet, capturing 49 interviews between Sydney and Melbourne, a new My Encounter record for a single trip.

Along with the interviews, the My Encounter team conducted exclusive screenings of JEM material for the local communities, including behind the scenes footage of JEM’s work, innovation and history, as well as previously unseen footage of the Rebbe from JEM’s archive.

For many, the highlights of these evenings were not on the screen, but right in front of them. JEM’s lead interviewer Rabbi Zalman Groner conducted live interviews, allowing the audience a rare glimpse at the impressive work of JEM’s crews. In Melbourne, the crowd was enthralled with personal stories and anecdotes from Rabbi Laibl Wolff, and in Sydney, Mr. Roger Clifford and Rabbi Shmuel Gurewicz inspired the captivated audience.

JEM’s trip to Australia had a unique benefit to local children, who arguably derive more inspiration from JEM – especially My Encounter – than their parents or teachers. “Especially after Gimmel Tammuz, we need to get our children involved,” said Rabbi Yechiel Cagen, “allowing them to be a part of interviewing parents and teachers, asking questions, and hearing stories first hand, gives them an avenue to connect with the Rebbe and develop a deeper connection.” In all, the JEM team visited five Chabad day schools.

Both legs of the trip enjoyed immense success, boasting packed halls for the screenings and school visits, along with over a hundred hours of film and audio captured from the back-to-back interviews. “I gained a newfound appreciation and connection to the Rebbe,” said one student. “As well as JEM, its My Encounter project and the staff that keep it going.”

The My Encounter project would like to thank all of those that made the trip happen.

To get involved in the project to document precious stories and memories of the Rebbe, you can join the Dollar-per-interview campaign at: DollarPerInterview.com.