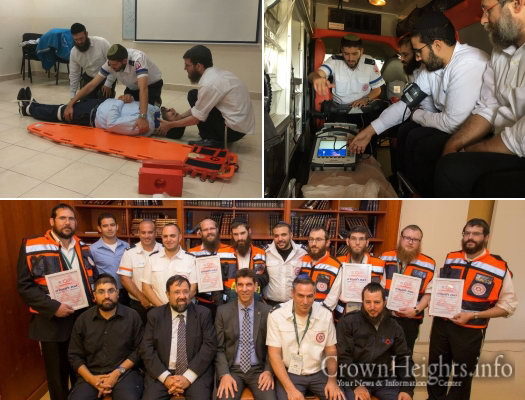 A delegation of Magen David Adom instructors traveled to the former Soviet Union to train Chabad Shluchim in Russia and Ukraine with administering first aid.

Due to the distance and the delayed arrival times of the local emergency crews, lifesaving skills were taught at the request of the Shluchim of Chabad in Russia.

After completing the course, the dozens of newly trained EMTs arrived to Israel to go through practical implementation alongside Magen David Adom crews in ambulances and MICUs.

At the end of the course that took place in Russia and after the implementation at the MDA station in Jerusalem, the MDA trainees returned back to Moscow, where they had a ceremony at the office of the chief Rabbi of Russia, Rabbi Berel Lazar. Among the guests were MDA Director General Eli Bin, Deputy Director General of Operations Gil Moshkovich and the course instructors Sagi Abramov and Itzik Asraf.

The trainees that successfully completed the course are Chabad Shluchim in Siberia, Ukraine and Moscow; they join the volunteers directed by Rabbi Shnior Halperin, who runs the Moscow Hatzalah with devotion and success.

At the ceremony, 12 paramedic certificates were awarded, along with 10 EMT certificates and paramedic bags, by MDA’s Director General Eli Bin and the Deputy Director General of Operations Gil Moshkovich to the graduates. A defibrillator was also given to the volunteers in Russia so they can use it to save lives in times of need.

MDA Director General Eli Bin said: “Magen David Adom has a strong relationship with the Chabad Chasidim in Israel and in the world. I see it as a high priority to get to these representatives overseas that engage in the holy work both physical and spiritual 24 hours a day in every corner in the world – to expand their knowledge and train them to save lives. We trained this group of representatives that has gone through all of the training with great success, with G-D’s help we will continue this valuable project in other places to fulfill the Talmudic saying: “He who saves one soul is like he has saved the entire world.”