« Picture of the Day: Kinus Down Under
Taste of Kosher Food Fair Held in Chicago » 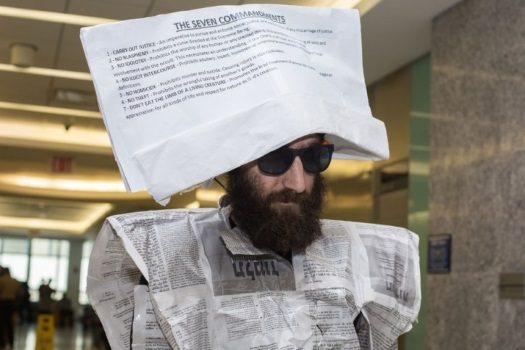 A Crown Heights man who had been prohibited from reading from Judaic texts during a pre-trial hearing found another way to bring his religious beliefs into the courtroom, arriving in Brooklyn Supreme Court yesterday wearing a shirt and hat covered with religious writings.

30 year old Aaron Akaberi, who was arrested on a variety of drug charges, wore a paper hat bearing the words of the Sheva Mitzvos Bnei Noach and a shirt that appeared to be made of taped together pages of a Hebrew-English Chumash.

The New York Post reported that Akaberi is a colorful character who has found himself in the media spotlight on several occasions:  he stagined a bizarre hunger strike in 2006 as a student at the University of Binghamton and was booted from the Air Force for refusing to participate in training exercises because they violated the beliefs of his religion, which he dubbed “Aaronism.”

Law enforcement sources paint a far more sinister picture of Akaberi, describing him as both dangerous and manipulative and, according to Gothamist, Akaberi has a string of prior arrests.

Akaberi never got a chance to present his unusual attire to Judge Martin Murphy. His court hearing was adjourned to a later date, but Akaberi told reporters that he had entered a plea of “not guilty” with the court.

« Picture of the Day: Kinus Down Under
Taste of Kosher Food Fair Held in Chicago »