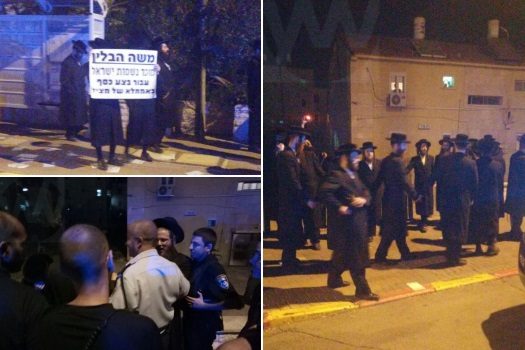 While three suspects were arrested after breaking into the home of Kiryat Gat Chief Rabbi Moshe Havlin Shlita last week, protestors returned on Monday night to protest against the rav again.

The protest stems from the rav’s participation in efforts that led to the recently-signed agreement between the IDF and Chabad rabbonim vis-à-vis military service for Chabadniks.

Protestors accuse Rabbi Havlin of “selling Jewish neshomos”, insisting he is personally profiting from each talmid compelled to enter the IDF under the agreement.

The three were arraigned a second time on Monday 9 Elul and released with restrictions. They were part of the group of over 20 people who entered the rav’s home and began a ruckus. The rebitzen was hospitalized for observation following the traumatic incident.

The rav told the media his rebitzen has yet to recover from last week’s traumatic incident.

The agreement reached between the Chabad rabbonim and the IDF permits talmidim to travel to 770 for ‘Kvutza’ with the understanding they will enter the IDF at age 24, or at the very latest, 26, permitting those who wish to continue limud following Kvutza.