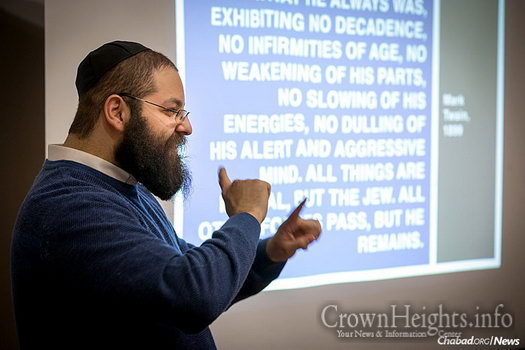 Those who attend High Holiday services this year at the Brooklyn Hebrew Society of the Deaf will have no excuse if they fall asleep during the rabbi’s sermon, jokes Rabbi Yehoshua Soudakoff. They probably wouldn’t anyway, as services are conducted in American Sign Language.

People who are Deaf at synagogues around the country often feel cut off from the rest of the congregation, says Soudakoff, director of The Jewish Deaf Foundation, a nonprofit organization that works closely with Chabad-Lubavitch to bring the religion’s messages to the Deaf community.

“At mainstream services, Deaf people often feel lost because of the communication barrier,” Soudakoff, who is Deaf, sent in an email. “The prayers are chanted in Hebrew. The rabbi makes speeches and gives explanations without any translation to sign language. The hearing congregants socialize among themselves, and it’s not easy for a Deaf person to join in.”

Stewart Gerlis started attending services at the Brooklyn Hebrew Society of the Deaf about eight years ago. He had been friends with Rabbi Fred Friedman, who retired from the society last year.

In an email, Gerlis, who is Deaf, describes the services as “amazing,” and writes that he has learned a lot about his Jewish identity because of the sign language used.

Since 1928, the Brooklyn Hebrew Society of the Deaf has provided a spiritual and practical home for Deaf Jews. There are a number of similar Jewish organizations and congregations in the United States, like the Hebrew Association of the Deaf, which was established a century ago in Philadelphia.

But in some parts of the country, Deaf Jews do not have these options.

“What about the rest of the Deaf community, who don’t have any friends in the Jewish world, or even the most basic understanding of Hebrew and Jewish liturgy?” asks Soudakoff. His organization’s website contains videos of the rabbi explaining Jewish holidays and reciting prayers in sign language for them to watch before the holidays.

‘Our Native Language of ASL’

Soudakoff will lead High Holiday services this holiday season at the Brooklyn congregation for the fourth time. He says that between 75 and 100 people attend, mostly those from the New York area, though he has met residents of Maryland and visitors from as far away as California.

“I have long seen a big need for Deaf people to have a place to call home when it comes to Judaism and spirituality. Deaf Jews do not often have an outlet for learning Jewish knowledge, or connecting to Jewish prayers and traditions on a spiritual level,” he says.

Still, he adds, “ASL-interpreted classes and services are no replacement for the real thing—programming provided in our native language of ASL.”

Prayers will be recited in ASL. During the reading of the Torah, someone will read the text while another person signs the words.

As at other holiday services, the shofar will be sounded—in this case, by someone who is hard of hearing, according to the rabbi.

And if it seems not as apparent for this group as it is for others, think again.

“Some of our congregants come closer to the bimah to listen to the shofar. Others listen with their hearing aids or cochlear implants,” explains Soudakoff. “Others use a balloon to feel the vibrations. And still others put their hands right on the shofar.”