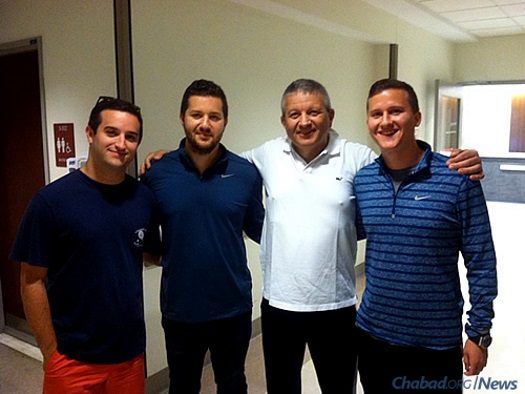 Jack Hananya of Long Island, N.Y., underwent a kidney transplant at Weill Cornell Medical Center after battling kidney disease for two decades. His donor was a Chabad rabbi. Hananya, a native Israeli, stands with his three sons, from left: Yuval, Guy and Tomer.

By the time most people on the East Coast had finished lunch and returned to work, Jack Hananya of Long Island, N.Y., was in recovery in a Manhattan hospital room, having just received a life-saving gift thanks to two Chabad-Lubavitch emissaries and a little matchmaking.

“I was diagnosed with kidney disease when I was 32,” Hananya said on Monday, less than 24 hours before the surgery. “At that stage, it was just beginning, and I was under treatment to maintain it, so that it wouldn’t hurt me for a long time. About two, two-and-a-half years ago, things got worse.”

Hananya, who is originally from Israel but has lived in the United States for many years, was put on the National Kidney Registry in June 2014—joining nearly 100,000 others who are in need of a kidney transplant, according to the National Kidney Foundation. By February 2015, he was on dialysis several times a week.

During this time, he met Rabbi Boruch Sholom Wolf, co-director of Chabad at the Medical Centers in New Hyde Park, N.Y. Wolf—who donated a kidney when he was 25—began searching for someone who would be a match for Hananya.

“It’s important when one sees death, especially a slow miserable death, and one has the ability to do something about it, to do something. I was in a unique position to contribute to the solution,” says Wolf. “And being that my existing Chabad was a niche Chabad at the Medical Centers, it was made-to-order for me to get involved. It was actually my witnessing people in my day-to-day encounters who were suffering from this disease and not being adequately helped—who were resigned to their fate of death—that drove me to start my kidney work.”

Thanks to Wolf’s efforts and those of some other individuals, a donor for Hananya was found in June 2015.

But complications arose, and the surgery had to be postponed. Nevertheless, the donor remained committed to helping the Hananya family.

“I think he is an angel. He waited for me for a year, and now we are going to go for the transplant,” said Hananya. “It is the ultimate gift that someone can give without expecting to get something back. There are no words to express how I feel.”

Rabbi Zalman Sandhaus, co-director of the Pardes Chabad Center for Jewish Life in Fishkill, N.Y., acknowledged that he has long admired those who have donated their kidneys to others. When he learned that he himself was a match, he said: “How can I not give it if a guy’s life is on the line?”

Hoping to Inspire Others

According to the National Kidney Foundation, most people with one normally functioning kidney have few (if any) related physical issues, meaning donors can go on to live a normal life.

The transplant surgery lasted a little more than three hours. Doctors told Hananya beforehand that he should be back to his old self in no time. In a show of appreciation, Hananya said he is determined to help others in similar situations by telling them about Wolf’s efforts.

“Living with dialysis three times a week—where you have to sit in a machine for four hours every time—is not pleasant. But this is the least of the problems. You feel bad, feel as if you are choking because you have too much fluid in your body,” explained Hananya. “Those who come forward to donate are angels. They help not only one person, but everybody—family, friends, everybody.”

Added Sandhaus: “I hope it serves as inspiration for other people to donate their kidney.”