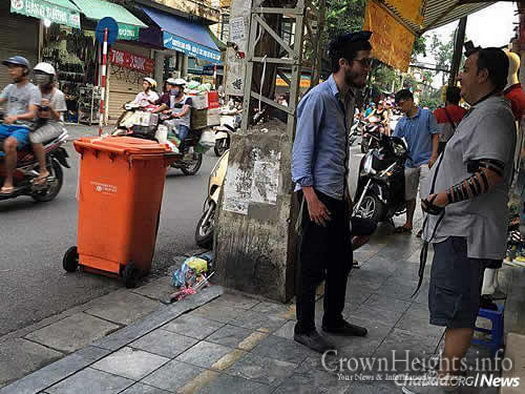 Forty Jewish people from around the world sat around a table not too long ago in Hanoi, celebrating Shabbat together.

“Almost everyone discovered that they had a previous connection to someone else there,” reports Mendy Tubul, a senior student at the Chabadyeshivah in Antwerp. “One woman had stayed at the home of the parents of another person at the table. There were some teens who knew the granddaughter of an elderly couple there. There was a fellow who lives a five-minute walk from my parents in Paris.”

He and fellow rabbinical student Berel Dubinsky have reported similar instances across the capital of Vietnam, where they have been working this summer to bring services and amenities to Jewish residents and tourists. They temporarily replaced Rabbi Levi and Mushky Laine, permanent Chabad-Lubavitch emissaries to Hanoi, in this city of more than 7.7 million people.

During their time over the past four weeks, they note that “G‑d has literally been guiding our steps.”

For example, a group of British Jews had been worried about where they would celebrate Shabbat. In a dark, underground area in the city’s much-frequented Old Quarter, they met the two rabbinical students who had been trying unsuccessfully to find an Uber to take them home after a fruitless-seeming search for Jewish tourists.

It was during one of those walks that Tubul and Dubinsky also caught the attention of a Canadian mother and son. Spotting the bearded young men in kipahs and with tzitzits, the son called out “Shalom!” from the rickshaw he had been riding in with his mother. Soon, he found himself wrapping tefillin.

Another encounter took place in a mechanic’s shop, where Dubinsky had taken his moped—along with bicycles, the transportation of choice in Hanoi—for repair. Trusting his sixth sense for finding members of the tribe, Dubinsky called out “Israelis?” and was rewarded with yet another connection.

This summer, some 300 Chabad rabbinic interns have fanned out to hundreds of locations all over the world as part of the annual Merkos Shlichus “Roving Rabbis” program. Each year, they leave New York City and go to places near and far to bring Jewish services to residents and travelers. They hold daily prayer services and offer tefillin, host Shabbat dinners—for many, access to kosher food they don’t get during the year—and answer questions about Judaism and related issues.

In addition to combing the streets for tourists and staffing the Chabad center, the duo reports that they have been able to help some Jewish people affix mezuzahs in their homes. For example, American ex-pat Joseph Berman, who moved to Vietnam this summer, was gratified to host a mini chanukat habayit (“home dedication”) ceremony that included the installation of a new mezuzah and words of Torah in his new apartment.

He plans to pray regularly with the tallit he brought from home and hopes to procure a pair of tefillin to complete the set.

“Thank you so much, Chabad,” he posted on Facebook (noting that he was “feeling blessed”). “This small act meant more to me than you’ll ever know.”