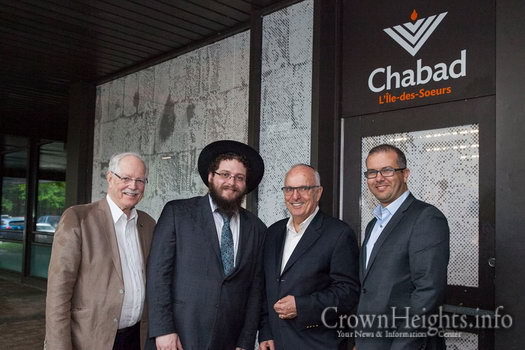 Christians, Muslims and Jews are praying literally under the same roof on Nuns’ Island in Montreal, where a Chabad synagogue, a church and a mosque occupy the same building, a former mall. And they are not just neighbors – the three groups are working together on common humanitarian concerns; their first joint project is helping Syrian refugees.

Three religious groups in Nun’s Island have come together under the same roof, hoping to spread a message of peace and unity.

A Jewish Chabad centre, the Al-Jazira Islamic Centre and the Catholic Ste. Marguerite Bourgeoys Church have all moved into the same building, a project that began after the church approached land developer Samuel Gewurz about building a bell tower.

“That was a novel request for me,” he said. “I thought about it for a moment and I told him, if we could consider the bells on the tower as bells of unity, then I’m in.”