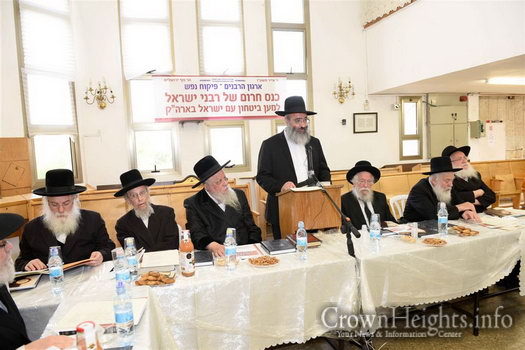 Following a special meeting of The Administrative Committee of the Rabbinical Congress for Peace, the rabbis issued a call to the Prime Minister Benjamin Netanyahu and his government to declare a state of emergency.

The following is from a statement released by RCP:

There are times when a nation is confronted with war and terrorist insurgence that threaten the security and lives of its citizens. In such cases, international law acknowledges the curtailment of certain basic rights as a proactive response.

The Rabbis lamented the fact that that past year has been one of in which innocent Israeli’s have been stabbed, shot and killed by their enemies, with little or no effective response from the Israeli government.

According to Jewish Law (Orach Chaim 329) (as well as international law) the sanctity of life takes precedence over all else, to the extent that one is not only permitted but is obligated to desecrate the Sabbath and pick up arms to repel the enemy from entering your town.

Therefore, the Rabbis called on the Israeli government to

The Rabbis reiterated their call to the government to unequivocally declare the annulment of the Oslo agreements, a copy of which should be publicly torn up in the Knesset. The government should also allow unlimited construction in all parts of Israel. Hesitating on these obvious measures is tantamount to the encouragement of terrorism by the government itself.

The Rabbis are crying out and beseeching the Prime Minister, Benjamin Netanyahu, government ministers and members of the Knesset to recognize that this is “a time of trouble for Yaakov!” The Torah’s prediction of the grievous consequences of transferring Israeli territory to its enemies is being actualized before our very eyes.

Come to your senses and heed the instruction of the Torah, and stop the further shedding of innocent blood, which continues unabated.

It is only by following the Torah – the Torah of Life – that the wave of terror can be stopped, and the Jewish people can experience true peace and tranquility in their land. You can prove this for yourself by heeding its words!