« Photos: Emunah Girls Head to Camp
‘Rabbi, How Can I Prepare for the Worst?’ » 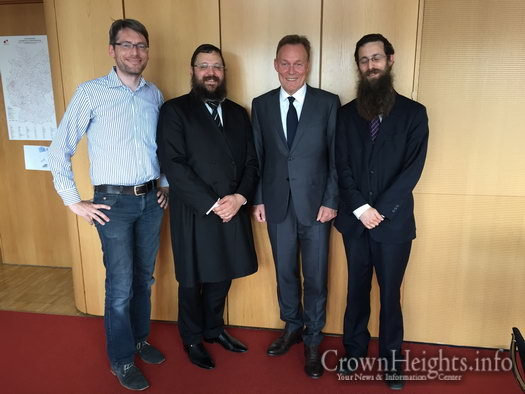 Rabbi Yehudah Teichtal, Chabad Shliach to Berlin and the Rabbi of the Jewish community in the German capital, was welcomed Yesterday (Tuesday) by Thomas Oppermann, parliamentary head of the German ‘Social Democratic Party’ (SDP), the second largest party in Germany, for an official meeting in his offices at the Bundestag.

The two discussed the future of Europe and its Jewish communities, in light of the British referendum. Rabbi Teichtal told Oppermann that in his conversations with European rabbis and Jewish leaders he encourages them to take action and prevent any further breaking in the EU. “I call upon the leaders of all Jewish communities around Europe to do whatever they can and execute all of their influence, in order to prevent any other countries from leaving the EU.”

During the meeting, Oppermann expressed his worries about the continent’s political future. “The EU means that people can move from one country to another and can settle down. If anyone believes that they should go back to their own nation and try to live for themselves, it is not the right way”. Oppermann later added that “We have to cooperate, we have to work together and we have to keep this European Union. We don’t want more ‘Brexit’s or “exits” so that the people of Europe will get the feeling that we have to defend our values, our democracy, our freedom and our welfare.”

Later, Oppermann spoke of the importance of the relations between the Jewish communities and the EU. “It is also important to keep the EU in good constitution because it enables us to have Jewish life in every European country, that can develop from one country to another. Jewish life is a great enrichment to have in Europe, in Israel and all around the world”.

“The establishment of the EU and the multi-cultural approach it symbolizes, contributes to the welfare of Europe’s Jewish communities”, said Rabbi Teichtal at the meeting, adding that “Therefore, the possibility of dismantling the EU and reverting back to nation states should worry all Jewish people around Europe… A strong European union is a paramount interest to the Jewish people of Europe in general and to Jewish people of Germany in particular.”

Earlier that day, speaking at the Bundestag, Oppermann turned to Chancellor Angella Merkel and urged her to carry the negotiations “as quickly as possible, in order to provide clarity. ‘Years of stalemate’ will not serve Europe’s interests”, argued Oppermann. “We want fair negotiations and to continue deep and friendly relations with the United Kingdom. But there must be no rewards for nationalism and European hostility. If the message is at the end, that one can get rid of the liabilities, without losing the benefits, then there will soon be referendums everywhere”, the SPD politician said.

« Photos: Emunah Girls Head to Camp
‘Rabbi, How Can I Prepare for the Worst?’ »