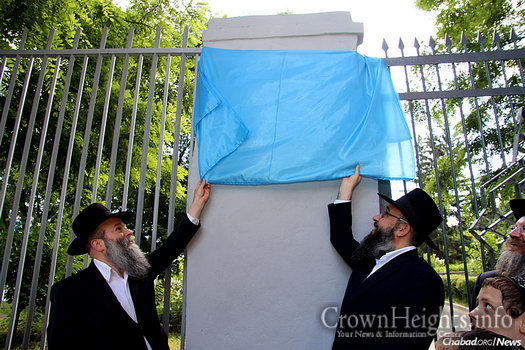 “It is a remarkable event for the whole city and the whole country,” Kaminezki, chief rabbi and head Chabad-Lubavitch emissary of the Dnepropetrovsk region, said at the event. Stambler is director of the Federation of Jewish Communities of Ukraine and heads the city’s Beis Chana Women’s Seminary.

The Rebbe was born in Nikolayev, Ukraine, but raised in Dnepropetrovsk, then known as Yekatrinoslav, where his father served as chief rabbi until his 1939 arrest by Soviet authorities. That it is the Rebbe’s hometown has long been a point of pride within the Dnepropetrovsk Jewish community—something that, according to Kaminezki, is now being recognized by the general population.

“It was Ukrainians within our city who initiated the project of renaming this street for the Rebbe,” says Kaminezki by phone. “They are renaming places after their national heroes, and they felt that the Rebbe, who grew up here, is one of their heroes as well.”

The widespread renaming of place names in Ukraine is the result of a controversial law passed in Kiev last year mandating the removal of all public remnants of Soviet rule, and includes everything from statues to streets to city names throughout the country. Even Dnepropetrovsk itself has been renamed, officially taking on the less Russian-sounding name of Dnipro.

Menachem Mendel Schneerson Street was formerly named after Bolshevik Sergei Minin, who at a point in the 1920s headed a section of the secret police. With so many places to rename, Ukrainians have, in a number of cases, been accused of honoring anti-Semitic Ukrainian nationalists they regard as heroes.

“The Ukrainians here are trying to honor their own heroes,” says Kaminezki. “It is coming from a good place and not meant to offend anyone, certainly not the Jews.”

While it may have originated with the city’s administration, the renaming of a prominent street after the Rebbe in a major Ukrainian city has been greeted happily within the Jewish community.

“This is a tremendous joy and happiness, and a huge pride for the Jewish community,” says Zelig Brez, director of the Dnepropetrovsk Jewish Community. “Everyone is very proud.”

The educational complex, which includes the city’s Jewish school, is named after the Rebbe’s father, Rabbi Levi Yitzchak Schneerson, and attended by some 700 children. The surrounding campus also houses a yeshivah and a girls’ seminary. A class from the yeshivah was there to witness the unveiling of the plaque.

“Every time you come to school named after the Rebbe’s father and located on the Rebbe’s street, you have to keep it in mind. “You have to learn in a way that brings nachas to the Rebbe, to become his genuine emissaries and spread the light of Torah and Chassidus,” Kaminezki pointedly told them at the event.

“It is commonly known that the name matters,” added the rabbi. “ … I am sure that all those who live on the [Rebbe’s] street will have special blessing and happiness.”