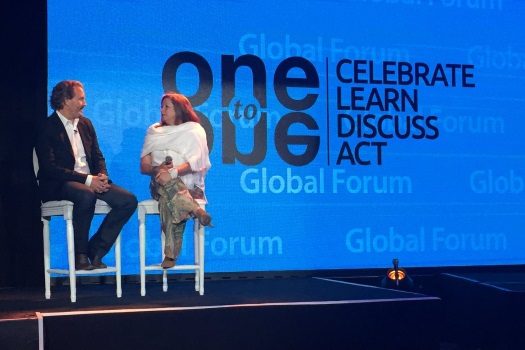 A marathon of public conversations and fireside chats at the inaugural One-to-One Global Forum are designed to spur tangible and transformative societal good.

As the clock struck one this afternoon, some 75 influential societal leaders, innovators and changemakers gathered together with a large group of laypeople at the New York Public Library’s Stephen A. Schwarzman Building on Fifth Avenue and 42nd Street in Manhattan. For the next 12 hours, with barely an interruption, they will engage in a marathon of public conversations and fireside chats—impactful dialogues that organizers of the inaugural One-to-One Global Forum say are designed to spur tangible and transformative societal good.

An audience of several hundred people will participate in the fast-paced discussions held in the library’s soaring, glass-domed Celeste Bartos Forum, with the day being split up into four three-hour segments. The event is being streamed at Onetoone.global, on Facebook Live and Livestream.

In 2014, Nkosi joined Johannesburg Chabad-Lubavitch emissary Rabbi David Masinter in spearheading the ARK campaign, which at its inception set a goal to distribute 1 million bright-yellow charity boxes shaped like the Biblical ark. ARK, an acronym for Acts of Random Kindness, distributes the instantly recognizable charity boxes throughout the country, encouraging citizens to put a little money in each day and give it to someone less fortunate. Endorsed by celebrities and embraced by corporations, Ark has popularized the slogan “Change the World for Good” throughout the country of 53 million people.

“The goal here is to educate. People today are overwhelmed with negative images and bad news,” says Beata Gutman of Grasshopper Global, who serves as executive producer of the event. “We need positive inspiration. Many of the leaders who will be on stage are people who identified problems and then worked to provide the solution.”

Co-sponsored by the United Nations Foundation, The Global Education & Leadership Foundation, HarperCollins and the New York University’s Bronfman Center, One-to-One’s premise was inspired by the Lubavitcher Rebbe—Rabbi Menachem M. Schneerson, of righteous memory—who is often referred to as the most influential rabbi in modern times.

“The Rebbe’s approach was to touch people and to motivate them to act on a ‘one-to-one’ basis,” explains actress Monique Coleman, who is the event’s Master of Ceremonies. “The questions and the talks will be probing. What shaped the presenters? What inspired them? What motivated them? And how do we transform good thoughts and good ideas into actual, concrete action?”

Millions of people around the world were first introduced to the Rebbe throughThe New York Times best-selling biography written by Joseph Telushkin, titled REBBE: The Life and Teachings of Menachem M. Schneerson, the Most Influential Rabbi in Modern History (Harper, 2014). Many of the speakers will draw from the Rebbe’s teachings, especially as depicted in Telushkin’s book—which, more than just a retelling of the Rebbe’s life, also related many of his foundational teachings—speaking about how these teachings have informed their own personal or public lives. Telushkin himself, the author of more than 20 books, including Jewish Literacy, will speak past midnight.

Other presenters will include Justin Rockefeller and syndicated talk-show host Michael Medved. Participants will also hear from scholars such as Professor Elliot Wolfson of the University of California, Santa Barbara; and Professors Philip Wexler and Jonathan Garb, both of Hebrew University inJerusalem.

Organizers say that One-to-One will see select speakers unveil for the first time new partnerships, collaborations and groundbreaking research that evolves from the event’s underlying philosophy.

Of course, when the event wraps up at 1 a.m. and people begin filtering down the sweeping staircase of the Beaux Arts library building and out into the night air, it will already be June 21—a new day filled with new opportunities.