« Enough with the Gefilte Fish; I’ll Have Sushi
8:00pm: If There Was a Pill that Guaranteed Self-Control.. » 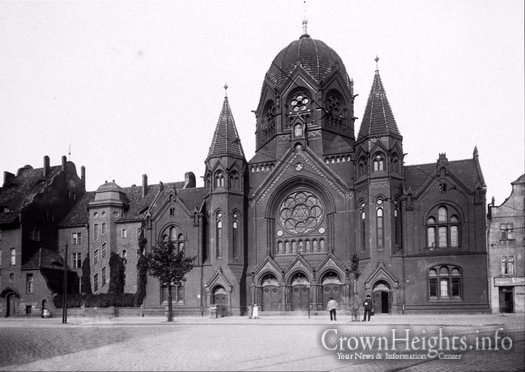 The great synagogue of Konigsburg (now Kaliningrad, Russia), seen here before it was destroyed on Kristalnacht in 1938, is currently in the midst of being rebuilt.

A massive crane crashed down at a site where construction workers are building Russia’s westernmost synagogue and one of the country’s largest Jewish community complexes.

The 450-feet yellow crane crashed down last week on the site in Kaliningrad, a Russian enclave located northeast of Poland, as a result of safety violations by the contractor, a municipal spokesperson told the news site New Kaliningrad.

No one was hurt in the incident except the crane operator, who was in the cab at the time of the accident. He sustained minor injuries. The crane fell across the intended construction area and breached a perimeter wall to crash down on an adjacent sidewalk. The crane cab was completely overturned.

« Enough with the Gefilte Fish; I’ll Have Sushi
8:00pm: If There Was a Pill that Guaranteed Self-Control.. »