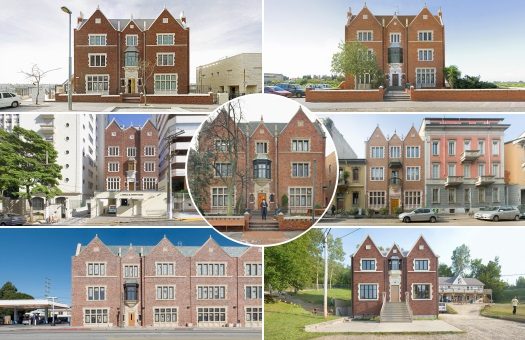 The Brownstoner, a Brooklyn Real Estate news outlet, profiled an unassuming two-story Crown Heights building that has over a dozen duplicates all over the world: 770 Eastern Parkway.

From the street, there’s little to distinguish the Gothic Revival mansion at 770 Eastern Parkway, seven blocks east of Prospect Park. But the unassuming Crown Heights building is actually one of the most iconic structures in New York City and beyond — at least 11 replicas of 770’s ornamented brick facade have been built in locales as diverse as Milan, Italy and Sao Paulo, Brazil.

The building isn’t as architecturally impressive as the Empire State Building or the Brooklyn Bridge. The structure at 770 Eastern Parkway has a different kind of magnetism: religion.

As the headquarters of the Chabad-Lubavitch Hasidic movement — one of the world’s largest ultra-orthodox Jewish groups — the building has become a powerful symbol of adherents’ faith and connection to the community.

Constructed in the early 20th century and originally used as a medical office, the building was purchased in 1941 by the leader of the Lubavitch movement because of one key architectural feature: It had an elevator.

The high-profile Jewish activist Yoseph Yitzchak Schneerson had just been diplomatically removed from Nazi-occupied Poland and was looking for a new American home and synagogue for his religious organization. Schneerson suffered from health problems and used a wheelchair. So when he went looking for a new religious headquarters, the elevator at 770 Eastern Parkway helped seal the deal.