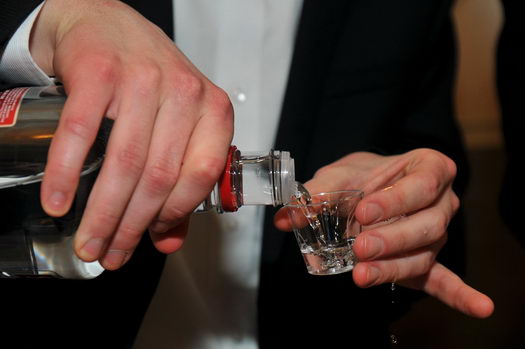 Brian Weinberger, an attorney, had been addicted to alcohol and pills for more than a decade until his wife learned of his problem. “The things that I had been hiding came out, and that caused a tremendous upheaval in my family and personally,” said Weinberger, 55, who lives in Scottsdale, Ariz., and has five children.

About 15 years ago, he entered recovery. He still attends Alcoholics Anonymous meetings every week, and in 2013, started participating in a support group organized by Rabbi Mendy Lipskier, who started the Jewish Recovery Fellowship of Arizona four years ago.

After meeting people grappling with addiction, like Weinberger, who either are in recovery or should be in recovery, Lipskier says he “felt that there was so much that the Torah can add to a 12-step program, so I decided to try to fuse the two together.”

In meetings with addicts, Lipskier, who co-directs Chabad Lubavitch of Fountain Hills with his wife, Tzipi, learned that many of them do not attend events that revolve around drinking because they could potentially relapse. One such example occurs on Purim, a holiday where Jews are instructed to drink until they can’t tell the difference between Haman, who tried to annihilate Jews in Persia during the fourth century BCE, and Mordechai, the Jewish man who fought to save his people.

“The idea is that Purim is all about the hidden hand of G‑d behind all the events; it was a tremendous miracle that Jews were saved,” explains the rabbi. “On Purim, we are celebrating and trying to internalize this message, and one of the ways to do that is to drink alcohol, and to suspend our rational thinking and recognize that there is something super-rational about faith that goes beyond reason.”

But addicts can’t take part in such a tradition.

With that in mind, Lipskier and other rabbis have organized Purim parties where Jews in recovery can participate in the holiday with the same spirit found at other parties (but without actual spirits), so they will not be uncomfortable.

“For an addict, drinking can literally mean the end of their life; it’s that severe. For an addict to drink on Purim, it would be far from a mitzvah—it would be the opposite of a mitzvah,” says Lipskier.

Chabad rabbis in Michigan and Pennsylvania and in a number of other sites around the world will be hosting similar parties on Purim, which starts this year the night of Wednesday, March 23, and lasts until the night of Thursday, March 24 (in Jerusalem, Shushan Purim is celebrated the next day, on Friday, March 25, and goes right intoShabbat).

For many of the leaders, addressing addiction has become an urgent problem. The Center for Disease Control and Prevention and other groups now describe addiction to prescription pills and heroin as an epidemic in the United States.

Lipskier believes that for a long time, “Jews had their heads buried in the sand and didn’t want to believe that [fellow] Jews were addicts, but this disease doesn’t discriminate. It affects all people.”

‘Peace in Your Heart’

Rabbi Yosef Lipsker, co-director of Chabad-Lubavitch of Berks County, Pa., with his wife, Chana, has been working with addicts for almost two decades, and thinks that addiction has become a much more common problem in recent years.

“People are popping pills more than ever before, and today, the marijuana is a lot more potent than ever before,” he says. (He and Mendy Lipskier are related through their grandfathers, who were brothers and spelled their names differently when they entered the United States from Russia, he adds.)

In 1999, Lipsker received a phone call from a Jewish man who was staying at the nearby Caron Treatment Center in Wernersville, Pa., asking him to visit. “I actually thought the guy had broken his hip and was in a rehab for physical therapy,” recalls the rabbi.

It prompted him into action.

After learning more about addiction, he started hosting weekly Shabbat dinners where grape juice was served instead of wine. Many of the guests are either residents of the treatment center, or have left and returned to visit the Lipsker family. He also started organizing dry Purim parties in 2000, emphasizing that he does not think that drinking alcohol is the only method to experiencing the holiday.

“One of the reasons you are supposed to drink until you can’t tell the difference between the evil and righteous figures,” he explains, “is to realize that even the enemy is by Divine design. One should realize that the hand of G‑d is behind everything. This should curtail anger and rage, which is a normal reaction when you see your enemy; you don’t feel anger. For those who must not drink alcohol—for whatever reason—this idea, of having peace in your heart, can be accomplished without drinking.”

Along with performing the four mitzvahs associated with the holiday: listening to the Megillah; giving food baskets to friends and neighbors; offering charity to the poor; and participating in a festive meal, the theme of this year’s Purim party is sports, featuring mascots from local teams.

A high school senior who left the recovery center in January was helping Lipsker wrap gifts last week for guests in advance of the party. The 18-year-old from Reading, Pa., who asked not be named, had always been someone who “enjoyed spending time with older kids, and I followed in their footsteps.”

Despite the lure of drugs and alcohol, he did well in school and was able to leave early to start taking classes at a community college in the fall 2015. With too much time on his hands, he continued to abuse drugs, and in October, he overdosed on Xanax. While in recovery, he connected with Lipsker. He has since learned more about Judaism, including how to wrap tefillin, and has Shabbat dinner each week at Chabad. He is also now back in school and hopes to attend college next year in England.

“I have always liked history, and I really liked learning about my roots,” he says. “I was never really spiritually connected prior to this.”

Weinberger, the attorney, appreciates the time Lipskier puts into preparing a teaching before each meeting on how the week’s Torah portion relates to recovery from addiction: “It’s not a task for him. He really wants to help people, and he adds a whole another element to our recovery.”

He says he is past the point in his recovery where he feels he can’t attend events where there is heavy drinking because of fears of a relapse. Instead, he says he just gets “bored because people are literally on a different plane.”

Last year, Weinberger attended the Chabad celebration, which featured music, an auction and food, and plans on going again this year.

“I couldn’t be more grateful that the rabbi’s shul reaches out to the recovery community in this way, at an inconvenience to themselves,” when they would probably prefer being at a party with alcohol, he believes.

“But being there to support those of us who don’t imbibe is very special,” he says. “It makes us feel included. To say, “You’re part of us, and we want to celebrate with you,’ is a mitzvah.”