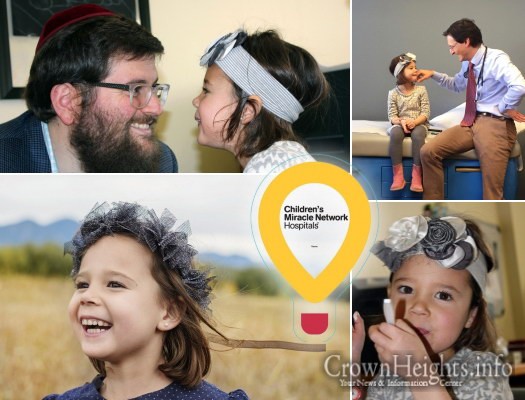 Zeesy Bruk, the five-year-old daughter of the Shluchim to the state of Montana Rabbi Chaim and Chavie Bruk, has been named ‘Montana’s 2016 Champion Child’ by the Children’s Miracle Network Hospitals, due to her courageous battle with GLUT-1 Deficiency, a rare genetic metabolic disorder.

A press release by the hospital treating her reads as follows:

Shodair Children’s Hospital is proud to announce that five-year-old, Zeesy Bruk, has been named Montana’s 2016 Children’s Miracle Network Hospitals Champion Child. Throughout this year, Zeesy and her family will serve as local, state, and national spokespeople, advocating for the charitable need at children’s hospitals across America.

Zeesy was named the 2016 Champion Child for the state due to her courageous battle with GLUT-1 Deficiency, a rare genetic metabolic disorder characterized by deficiency of a protein required for glucose to cross the blood-brain barrier. This disease can sometimes be misdiagnosed as epilepsy which is what Zeesy was initially diagnosed with due to her frequent seizures. However, her parents continued to look for answers as Zeesy continued to experience tantrums and developmental regressions. It was because of their commitment, dedication and love that set them on a course determined to find answers. Thanks to Shodair Children’s Hospital and its genetic testing and counseling, Zeesy is now thriving and facing her diagnosis head on. Because of her inability to process proteins, she must follow a strict diet. She continues to visit doctors regularly, but she also continues to have a care-free attitude and doesn’t let this diagnosis get in the way of her living and loving her life.

During her time as the Champion Child, she will serve as the ambassador for the Treasure State, bringing awareness to the various medical challenges facing many young people today. Later this year, she will unite with the Champion Children from each state in Washington D.C and Orlando, Florida on an official Ambassador Tour to highlight the vital work of children’s hospitals. Her first appearance as Champion Child will take place on March 14th for the CMN Spring Kickoff Luncheon for Bozeman.