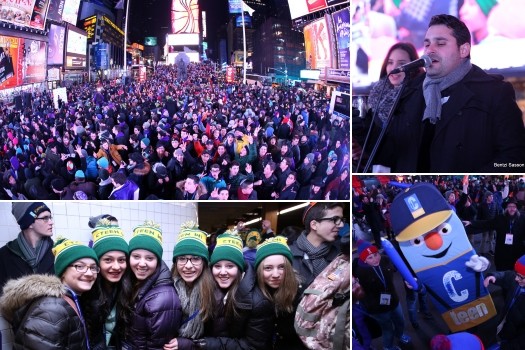 Over 2,000 participants from twenty-three countries will be attending the upcoming CTeen International Shabbaton in Crown Heights. The Shabbaton, which will take place from 17th-19th Adar Aleph (February 26-28th), will be the largest CTeen event to date.

In honor of this grand number—and the Hakel year—CTeen had no choice but to move the annual CTeen Choice Awards Banquet out of Crown Heights. This year, for the first time, the awards will be be hosted at the Brooklyn Expo in Williamsburg.

“Baruch Hashem, CTeen has grown exponentially in the past year alone,” said Rabbi Moshe Kotlarsky, Chairman of CTeen. We have reached a point where Crown Heights venues can no longer accommodate the large number of participants. We’re in awe of how many teens signed up.”

The CTeen Choice awards is just one of the many highlights that the Shabbaton offers. Nine Friday Tracks—where teens tour famous sites of New York, from the Statue of Liberty to Madame Tussaud’s Wax Museum— will be offered this year. The Educational Track will return for its second year, with lectures and classes hosted at Chabad of NYU. Speakers at the educational track will include Rabbi Shai Taub and Rabbi Yona Korn. Still, the biggest change that stands out in this year’s plan is the move to Williamsburg.

If the teens have anything to say about it, it won’t be long before the Shabbaton takes over a lot more than just the Brooklyn Expo.

“I’ve attended the shabbaton for the past four years,” shared Rachel Wilkes, CTeen leader from Miami. “It’s been incredible to watch how it has grown from one year to the next. Last year, the award show was hosted on two different floors! I’m really looking forward to once again being in the same room as everyone all at once!”

In honor of Hakel, CTeen has prepared an exciting and unique program that will feature world renowned speakers, as well as a tribute to Ezra Schwartz, the Jewish teen whose life was cut short in a terrorist attack last November, and to those whose lives were cut short during the terrorist attack in Paris, France. A mitzvah pledge will also take place as in the past years, honoring the lives of all who were lost.

“This year’s choice awards will be bigger, better, and more inspirational than ever before,” said Rabbi Dovid Weinbaum from CTeen of West Suffolk County, New York. “We have a great program prepared. I can’t wait to see the looks on the teens faces when they find out what’s in store!”

In preparation for this grand event, CTeen would like to extend a request to Crown Heights residents. Several teen chapters and chaperones are still without accommodations for the the Shabbaton. If you or someone you know is available to help place teens, please call: 7184674400 ext. 4344.