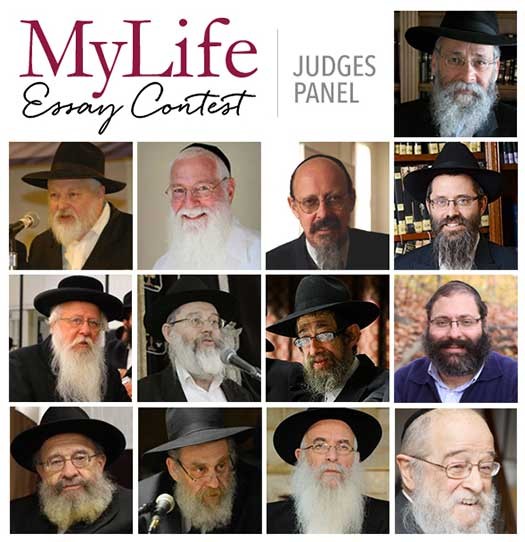 The excitement is mounting around the The Meaningful Life Center’s 2nd MyLife: Chassidus Applied Essay Contest as MLC announced the first list of prestigious judges for this year’s contest (the list is in formation, with more judges to be confirmed shortly).

“The huge popularity of this essay contest has attracted top scholars to serve as judges,” said Contest Director Sruli Baron.

The contest has become a powerful incentive for inspiring and empowering people across the globe to write essays applying ideas in Chassidus to solve contemporary life issues. With a little over two weeks left to submit essays, the contest is well under way. Submissions are streaming in from around the world. The contest guidelines are specifically engineered to give everyone an equal chance of winning.

The panel of judges is comprised of some of this generation’s most distinguished Torah and Chassidus scholars. Additionally, a special panel of Hebrew-fluent judges were chosen to review the large number of Hebrew essay submissions. These experts will be tasked with the responsibility of evaluating and selecting the winning essays, awarding $10,000 to the first place winner, $3,600 to the second place winner, and $1,000 third place.

Rabbi YY Jacobson shared his enthusiasm about serving as a judge for the second year in a row. He said, “I am excited to take part in this ​inspiring project and look forward to reviewing essays that apply Chassidus to real life. ​I have seen first hand the ​profound ​impact made by encouraging people to ​apply Chassidus ​in tackling life’s challenges.​”

An anonymous donor is once again sponsoring this revolutionary Hafotzas Hamayonos initiative which encourages the study and application of Chassidus. Everyone is invited to submit an original essay applying an idea or methodology in Chassidus to solve a contemporary life issue. The essays will be blindly judged (meaning that the essay authors will be unknown to the judges) and the winner will be selected by the panel of judges according to a strict rubric of judging criteria. The strict rubric of judging criteria ensures that every essay is given a fair judgment.

Last year’s first place winner, Aryeh Gurewitz, currently learning at the Yeshivah Tiferes Bachurim in Morristown, had these words of encouragement to offer, “What’s exciting and encouraging is that it’s not necessarily the person who has learned the most or the deepest maamarim who will be able to communicate the concepts in a way that helps people really grow. I really believe that anyone who thinks deeply and carefully into a maamar or a perek of Tanya can find a way to make it relevant—even life-changing—to anyone.”

Contest Director Sruli Baron reports, “Last year over 530 entrants sprung into action to take the first ever MyLife Challenge. Over one million words—enough to fill 12 full volumes—were written, all applying Chassidus to our daily lives! These powerful essays empowered and inspired thousands of others across the globe with the teachings of Chassidus! This year we want to see this grow to new heights, doubling and even tripling its reach. We are already seeing submissions coming in from around the world. The challenge is one that engages so many people both young and old: How real is Chassidus to you?”

The deadline for contest submissions is February 24, 2016 (15 Adar 1) 11:59 PM EST. Visit meaningfullife.com/contest to view the contest rules and guidlines and to submit your essay.