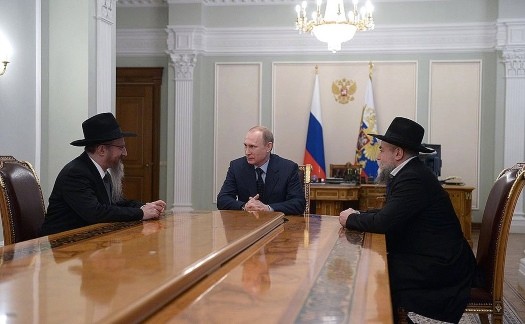 Russian President Vladimir Putin met yesterday with the country’s chief rabbi Berl Lazar and the head of the Federation of Jewish Communities of Russia, Alexander Boroda. He congratulated all Russian Jews on Chanukah and wished them prosperity and success.

“I hope that all the dreams, the plans will be implemented. This is a big, bright holiday, when a single candle is lit every day.  It’s not just a feast of light, but the valor of the Jewish people,’’ he said.

The President also recalled that Chanukah was established in the 2nd century BC in memory of the purification of the Temple in Jerusalem, the consecration of the altar and the resumption of temple services after the expulsion from Temple Mount of the Greek-Syrian armies in 165 BC. In memory of the victory of the Jews over a powerful enemy, Hellenistic king Antiochus IV Epiphanes of Syria and the cleansing of the temple of the Greek idols, Jews celebrate Chanukah for eight days – exactly as long as the iconic lamp was burning, fueled with the only small jug of pure uncontaminated oil remaining in the temple.