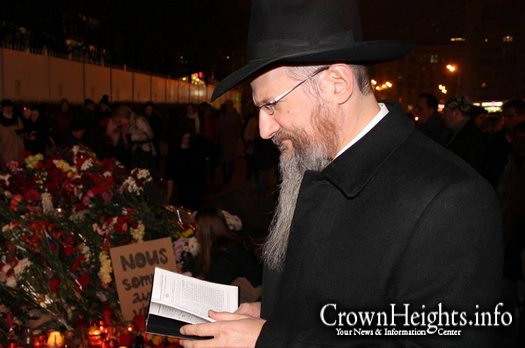 Chief Rabbi of Russia Berel Lazar lit a candle at the Embassy of France in Moscow and read a commemorative prayer for the victims of serial terror attacks in Paris.

“Unfortunately, our people know very well what is international terrorism. Militants killed thousands of Jews in various countries, including France. That is why your pain is so close to us. The grief of the French people is our grief,” the rabbi said in his letter to French president Francois Hollande spread on the eve by Lazar’s press service.

According to the rabbi, the chief lesson of the Friday tragedy is that “we all have to finally understand that it is impossible to reconcile with the monsters, any negotiations with extremist organizations and regimens are unacceptable, double standards in relations with terrorists are inadmissible.”

“Any appeals to “understand” militants or to equal murderers to the national liberation movement result help terror achieve its goal and make all of us hostages,” Lazar is convinced.

He called terror in disguise of Muslim slogans “Nazism of the 21st century.” “Pathological violence of these people, fanatical methods of their actions prove that they are not better than those who killed millions of people in gas cameras in the early 40s. War against them should be the war of extermination,” the chief rabbi of Russia stressed.