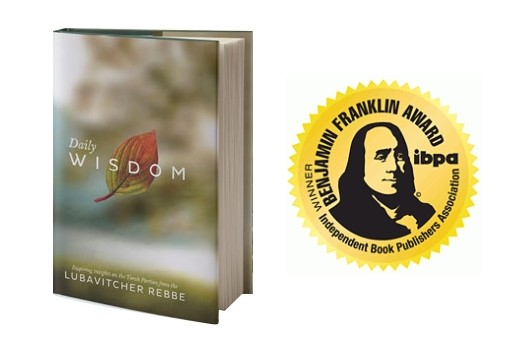 'Daily Wisdom' was the gold winner in the religion category of the prestigious 2015 Benjamin Franklin Awards.

In the year since Daily Wisdom, an anthology of 378 daily inspirational lessons culled from the vast and deep Torah teachings of theLubavitcher Rebbe—Rabbi Menachem M. Schneerson, of righteous memory—was released in the English language, it has made Torah and its timeless teachings to an ever-increasing circle of readers.

Now, as Jewish communities around the world, prepare to read the Torah anew following the holiday of Simchat Torah, the work is gradually being released online in Hebrew, French and Spanish.

The lessons in Daily Wisdom are apportioned according to the day-to-day study cycle of the Torah’s weekly portion. The teachings were adapted into English by Rabbi Moshe Wisnefsky and produced in book form by Chabad House Publications of California. It was published by Kehot Publication Society in July of 2014.

Following the book’s initial success, it was republished in a compact format as the AsherDavid Milstein Edition. It became the gold winner in the religion category of the prestigious 2015 Benjamin Franklin Awards a few months later.

In addition to being fully accessible online atTheRebbe.org, the teachings have also been incorporated into Chabad.org’s “Hayom” app, which brings together halachic times, daily study, inspiration, yarhtzeits and Hebrew birthdays for an all-inclusive Chabad.org app experience. And with the beginning of the new cycle of Torah study this week, the daily portion of Torah Wisdom is also available on Chabad.org’s Facebook page.

The teachings are intended to serve as a companion to the full text of the daily portion of the Torah, which is customarily studied along with Rashi’s classic commentary. In addition, each teaching is preceded by a brief summary of the day’s Torah portion.

“The Rebbe’s inspirational teachings are a relevant and living source of insight and comfort,” noted Rabbi Chaim Nochum Cunin, director of Chabad House Publications. “Daily Wisdom is a vehicle through which thousands of people are now being personally impacted by these teachings. We are excited that the Rebbe’s teachings will now inspire even more people by translating and adapting them into additional languages.”